Motorsports
Mopar, Vipers take to the track this weekend 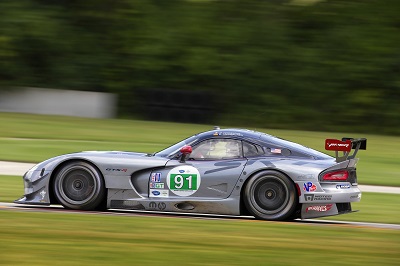 Dominik Farnbacher and Marc Goossens drove the No. 91 SRT Viper GTS-R to victory in the GT Class Sunday at Road America, the first factory-backed American Le Mans Series presented by Tequila Patron win for the Viper since 2000.

Drivers Marc Goossens (L) and Dominik Farnbacher It was the 17th factory-backed victory for SRT Viper in ALMS competition (16 victories from 1999-2000). The last victory came December 31, 2000 in Adelaide, Australia. The Vipers posted a 1-2 finish led by Karl Wendlinger/Dominique Dupy followed by Jean-Philippe Belbc and Ni Amorium.“Winning at Road America is not only a victory for Team SRT, it’s also a win for the entire SRT Brand and the Viper,” said Ralph Gilles, President and Chief Executive Officer – (SRT) Street and Racing Technology Brand and Motorsports, Chrysler Group LLC. “We are very proud of the performance delivered by our drivers and the crew. I am truly humbled by the hard work and dedication given by Team SRT this entire season. Thank you for all the support of our extended Chrysler Family.”Goossens drove the No. 91 Viper past Antonio Garcia’s Corvette with 33 minutes remaining in the 2:45 event and was never challenged. However, there was plenty of nail biting in the SRT Motorsports pit over the final eight minutes of the race. Fuel was an issue. The No. 91 along with the rest of the top five in the running order were low on fuel and would have to make a final pit stop for a splash under green-flag conditions. Just as the 91 was ready to make that stop, the caution appeared. That’s all Goossens needed as he had just enough fuel to complete two more circuits around the 4.048-mile circuit at reduced speed for the win.“The last five minutes were a nail biter,” said Beth Paretta — Director of Marketing and Operations, SRT Brand and Motorsports. “We had different strategies for the two cars and it was going to come down if we had a yellow or not. We got the yellow, so that determined the outcome with the 91 getting the win. I’m so happy for SRT Motorsports and the SRT brand. It’s been one year; this is our birthday, so happy birthday to SRT Motorsports. This is a great way to celebrate.”Goossens was very quiet in the car the last couple of laps, listening for that possible sputter of the engine. Only as he crossed the finish line under the checkered flag did the anxiety subside. “Man, it was a great race,” he said. “We gambled a little bit on the fuel. We had to save fuel, but we had to push as well. There is no secret the last caution helped; we were very low on fuel to say the least.”“I’d like to say a very big thank you to Ralph Gilles, Beth Paretta, Gary Johnson, Matt Bejnarowicz and of course Bill Riley for building such a great car. It’s not only the history of being the first factory-backed victory for Viper since 2000, but we’re only one year old with this program. This is the first track that we’ve gone to for the second time. It was a great race, a great weekend.”The race weekend belonged to SRT Motorsports and the two SRT Viper GTS-Rs from Riley Technologies. The No. 93 Pennzoil Ultra SRT Viper GTS-R claimed the pole while the No. 91 was fifth on the starting grid. Both cars led laps throughout the race including a couple of stints running 1-2 in the order. To complicate the situation for the competition, the two Vipers were on different pit strategies. The 91 ended up with the winning strategy but the No. 93 Pennzoil Ultra SRT Viper GTS-R had the field covered if the race had stayed green. The 93 Viper with Jonathan Bomarito and Kuno Wittmer aboard finished sixth.