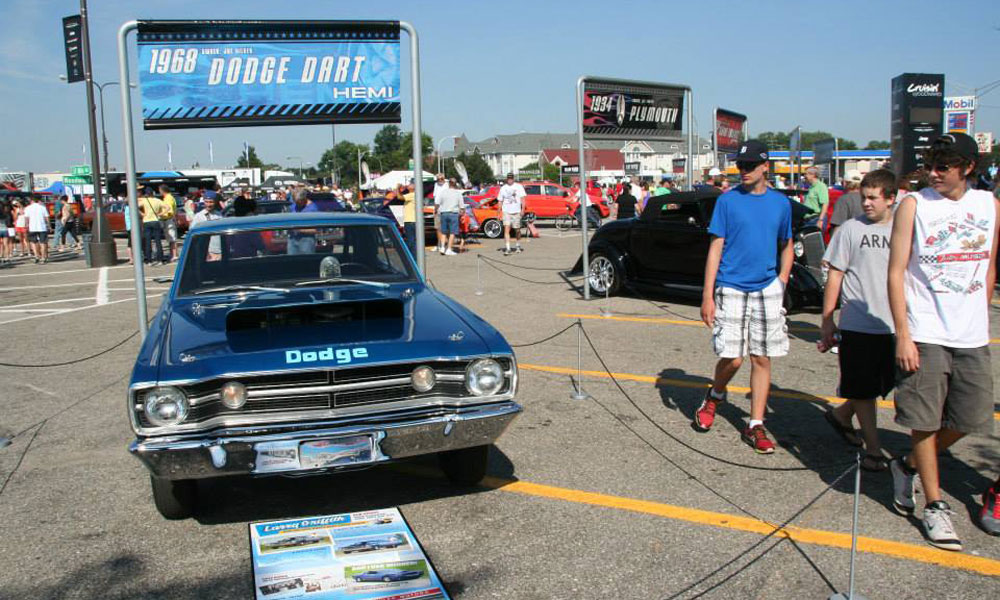 Car fans check out a classic Dodge Dart during the Woodward Dream Cruise in metro Detroit.

It’s just a bit more than a week until the “official” day of the Woodward Dream Cruise on Saturday, Aug. 16. The rumble of engines, squeal of tires and cheers of car fans already echo around Woodward Avenue as enthusiasts “pregame,” you could say, for the big event.

The southwest corner of Woodward and 13 Mile Road is Mopar or No Car Central in the days leading up to the Dream Cruise. With the Dodge brand celebrating its 100th anniversary this year, the Chrysler Group’s corporate display will be steeped in performance.

The “Mopar or no car” rally cry is certain to be greeted warmly, too. Mopar’s performance parts heritage, including the 426 Race HEMI engine introduced 50 years ago, and current go-faster offerings will be well represented, as will all the Chrysler Group brands.

Just in case you need more reasons to head for the Chrysler Group display at the Woodward Dream Cruise, here are 10:

10. There are 200-plus feet of frontage on Woodward Avenue at the Chrysler Group display to check out the classic metal rolling by. The displays, demonstrations and live entertainment get started at 9 a.m. on Aug. 16.

9. In honor of the Dodge brand’s 100-year anniversary, more than 100 Dodge Chargers and Challengers, and 200 Scat Pack Forum members roll in for the Dodge Night Car Show on Friday, Aug. 15.

6. Get the chance to meet and chat with Chrysler Group brand CEOs, engineers and exterior and interior designers at the display. Tell them about your favorite Mopar vehicle.

5. Wear your Mopar pride and pick up a t-shirt or hat. Thousands will be for sale.

4. Classic cars and great tunes go hand in hand. Live bands will rock out throughout the day on Saturday, Aug. 16.

1. Dodge kicks off Dream Cruise week with a special performance announcement on Wednesday, Aug. 13, at 10:30 a.m. Watch it live on the Internet at https://new.livestream.com/chryslerlive/DodgeProductReveal.