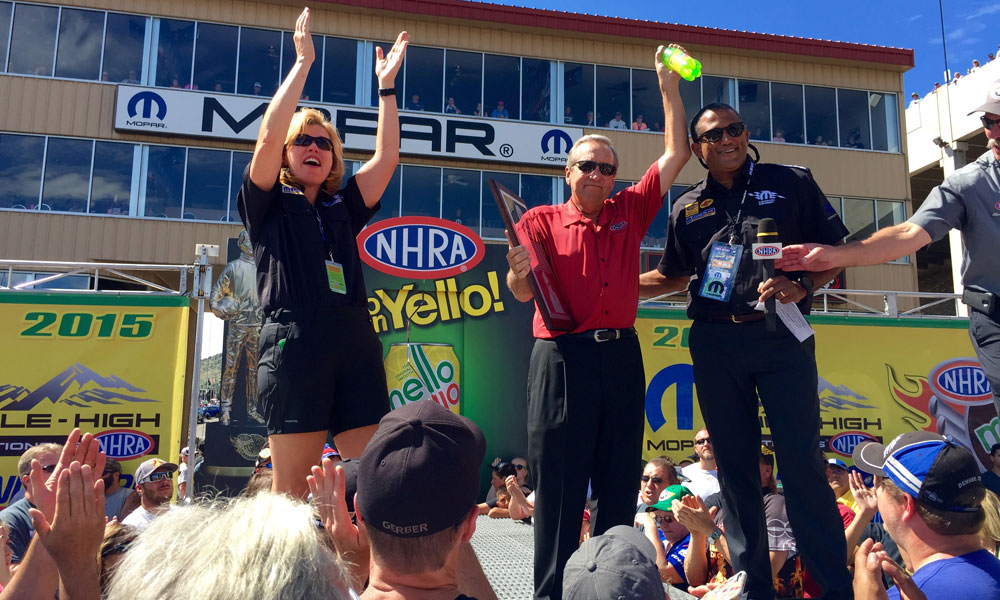 During five decades of drag racing, Don Schumacher has collected plenty of awards. His latest is among the most special.

At the NHRA Mopar Mile-High Nationals near Denver, the racing legend joined the select group that has received the Mopar President’s Award — an honor reserved for those who have made outstanding contributions to Mopar’s legacy.

A one-of-a-kind plaque, created to commemorate the achievement, was presented to Schumacher by Ross McGinnis, Vice President of Mopar Sales and Product Development, and Tricia Hecker, head of Mopar Marketing.

But the man known as “The Shoe” in racing circles is accustomed to winning.

Schumacher’s racing career got rolling in the late 1960s and early 1970s. He captured the 1970 U.S. Nationals crown behind the wheel of a Plymouth ‘Cuda Funny Car.

His driving record includes five NHRA national event wins. What really cemented Schumacher’s driving legacy, though, was his knack for winning match races — “The Shoe” won about 70 percent of 560 match races between 1968 and 1974.

But Schumacher parked his drag car in 1974 to focus on raising his family and growing his electric components company, Schumacher Electric Corp.

He returned to the drag strip 23 years later, in 1997, to help his son, Tony, battle drag-racing’s best. It was the start of a team, Don Schumacher Racing, that has racked up more than 250 event wins and four NHRA Funny Car championships, including defending champion Matt Hagan.

His business acumen remains as strong as his racing instincts. Schumacher sets up hospitality areas next to his racing teams’ pits to give sponsor clients, VIPs and fans an up-close view of the action. More than 30,000 people spend time inside a DSR hospitality area during the course of an NHRA season.

His accomplishments earned Schumacher induction into the International Motorsports Hall of Fame in 2013. And now, the Mopar President’s Award.

Don Schumacher — a man fueled by high octane and Mopar.