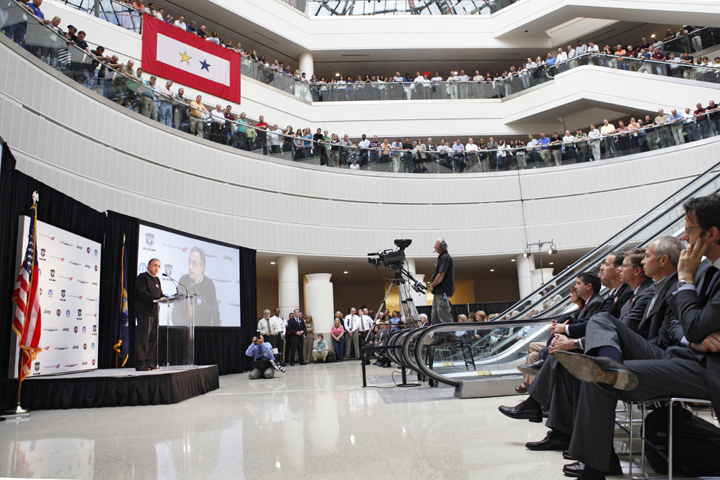 Chrysler Group CEO Sergio Marchionne talks to Chrysler Technical Center employees and contractors May 24, 2011, about the company-wide effort and success in paying back the 2009 U.S. and Canada loans.

It’s a day 23 months in the making, six years ahead of schedule, and a day during which Chrysler Group CEO Sergio Marchionne spoke both praise and caution.

And, the highlight transpired at 10:13 a.m. when Marchionne received confirmation from Citigroup that company’s wire and bank transfer of payments to the U.S., Canada and Ontario governments were received and Chrysler Group’s $6.7 billion loan was paid in full, with interest.

Marchionne spoke to Chrysler Group employees at the company’s headquarters at noon (above), and then headed to the Sterling Heights (MI) Assembly Plant for the 2 p.m. public portion of what he called the company’s “Independence Day.”

During his comments, Marchionne said the “joy” of June 10, 2009, when the loan were made, “was conditioned by the sense of responsibility we all shared.

“Not just for the privilege we had been given of helping get an American icon back on its feet, but more importantly for our moral obligation to justify the support that American and Canadian taxpayers had given us.

“We knew we had to live up to the expectations of those who had made sacrifices on our behalf.”

As he has done so in the past, Marchionne cautioned about celebrating too much:

“Today is a major milestone for Chrysler Group, but our work is by no means finished….

“Repayment of the government loans closes an important chapter in our history, but we still have a great deal left to accomplish before regaining our rightful place in the automotive landscape.”

You also may catch Ron Bloom comments on the Pentastar YouTube Channel, and view more images from the ceremony at our Sterling Heights Assembly Plant.