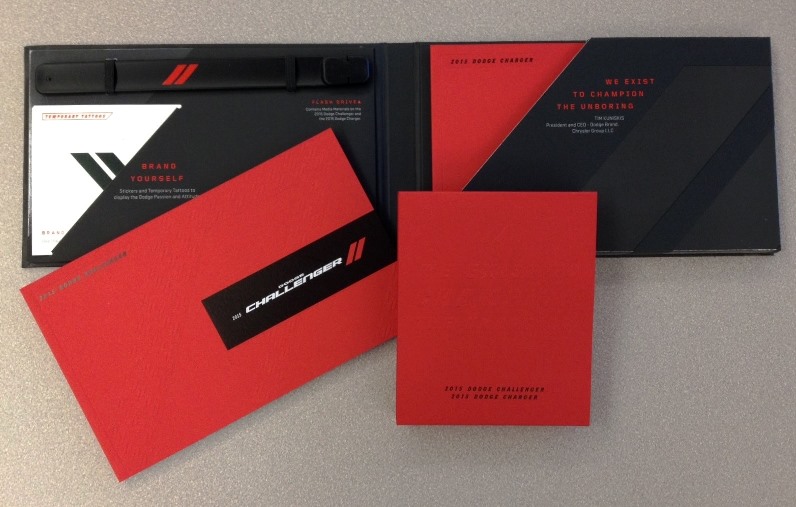 Next week, if you tweet,  you have the chance to win some of the same items the media received in the Dodge media kit (lower right) during the 2014 New York International Auto Show.

Click for the official rules, but for now, here’s a quick overview:
Using your Twitter account (you’ll need one if you want to play), tweet which you like best: the 2015 Dodge Challenger or the 2015 Dodge Charger and tell us at least one aspect you like about it. Depending on the car you choose, include the #2015Challenger or the #2015Charger hashtag with your opinion.Note that any “trash talking” against the other vehicle or saying you like one because you don’t like the other will eliminate you from the contest.The tweet-to-win contest runs 8 a.m. ET Monday, April 28, through 8 a.m. ET Wednesday, April 30, 2014.From all qualified entries for #2015Charger and #2015Challenger, Chrysler Group will randomly select one winner to receive a 2014 NYIAS Dodge media kit, which includes the Dodge stickers and temporary tattoos set (below), as well as a slap wrist thumb drive media kit and brochures on the new Challenger and Charger.

We also will randomly select two more winners: One from each of the #2015Charger and #2015Challenger fans will receive a set of Dodge stickers and temporary tattoos.

It’s that simple. Again, see our Tweet-to-win rules for this contest.