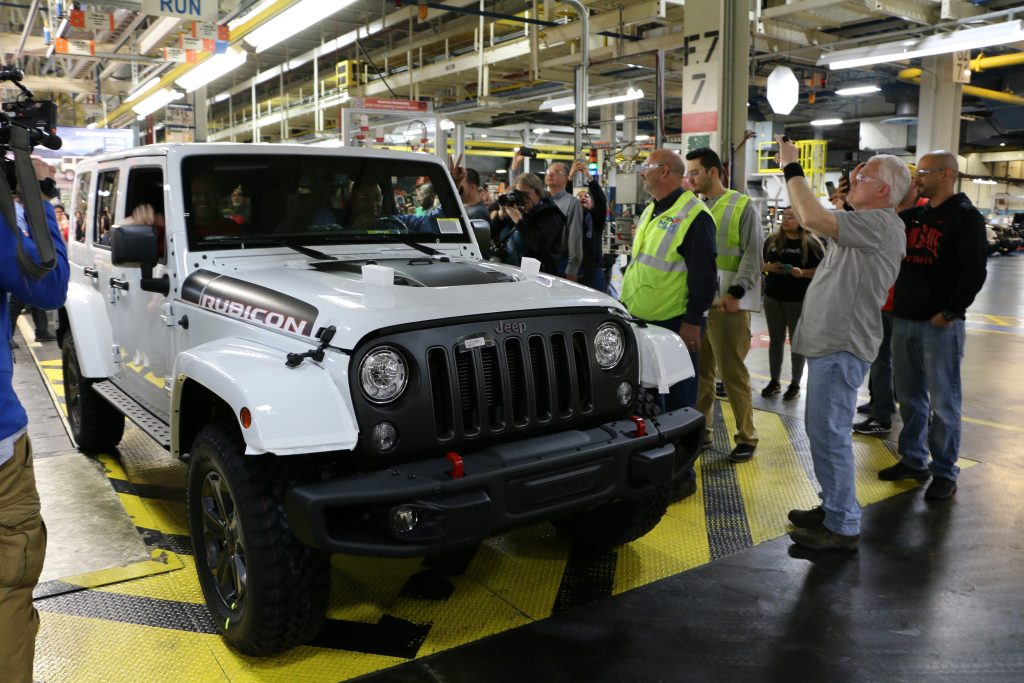 When a white 2018 Jeep® Wrangler Rubicon four-door arrived at end of the assembly line at the FCA US Toledo Assembly Complex, it marked the end of one era and the start of a new one.

For the past 12 years, employees at the plant have been producing the Jeep Wrangler JK model for the United States and the world. 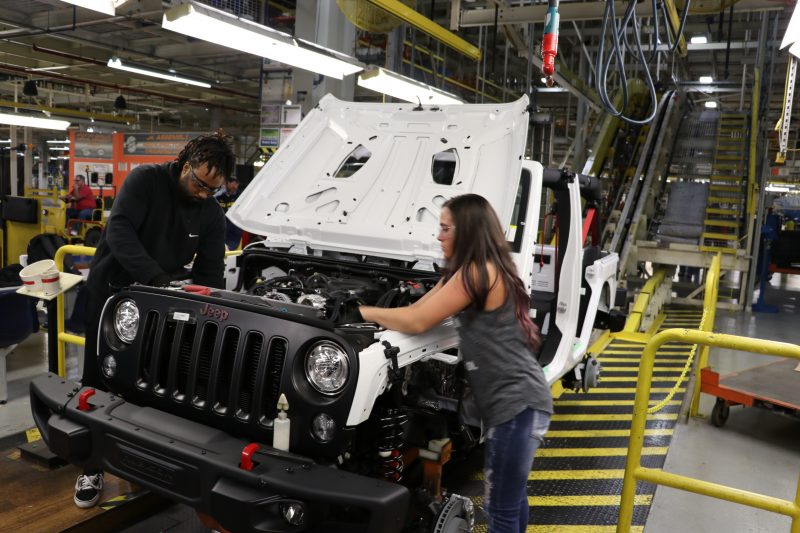 Toledo Supplier Park employees work in the engine compartment of the last Jeep Wrangler JK as it rolls through the assembly line.

With the end of JK production, Toledo Supplier Park will be down for several months as it is retooled for the all-new Jeep truck, which will launch in the first half of 2019.

Not to worry, though, the all-new version of the Jeep Wrangler is now being built in a different part of the Toledo Assembly Complex.

“This is not just the end of one era, it’s the beginning of the next part of our future,” said Chuck Padden, Toledo Assembly Complex Manager. “For generations, the people of Toledo have been building Jeep (vehicles) … and our next-generation Jeep truck is just around the corner.”

The JK was the continuation of the iconic vehicle that was first built in 1941, and continues to be the “heart and soul” of the Jeep brand. During its 12-year production run, 2,165,678 Wranglers were built. Plant officials added that building that many vehicles translates into about 2.7 billion parts installed during the life of the model.

Additionally, building an average of 175,000 Wranglers a year has been quite a feat for a plant that was designed to only build about 120,000.

“How great is it to know that many people, not just in the United States but around the world, want this product,” said Mark Epley, UAW Local 12 Jeep Unit Chairman, who credited the collaborative efforts of the union and FCA in the great success of the Wrangler. “When you are walking down the line and looking (at the people building the Wranglers), they are wearing Jeep apparel – shirts, hats, sweatshirts – because the people that work here live and breathe Jeep.”

This sense of pride was on full display during the final day of production of the Wrangler JK, as employees gathered around the vehicle as it progressed along the assembly line. Team members would perform their job, then pose with the JK and take selfies.

“The employees take great pride in what we have done over the years,” said Louis Newsom, Team Leader Coach – Toledo Assembly Complex. “Seeing this particular model go away is a bittersweet moment. We have had people in tears. Today brings about the end of one era and opens up an era for a new opportunity.”

Manufacturing capacity for the new Jeep truck was created by moving production of the next-generation Jeep Wrangler (JL) to the north side of the Toledo Assembly Complex as part of a $4.5 billion industrialization plan to realign the Company’s U.S. manufacturing base to expand the Jeep and Ram brands.