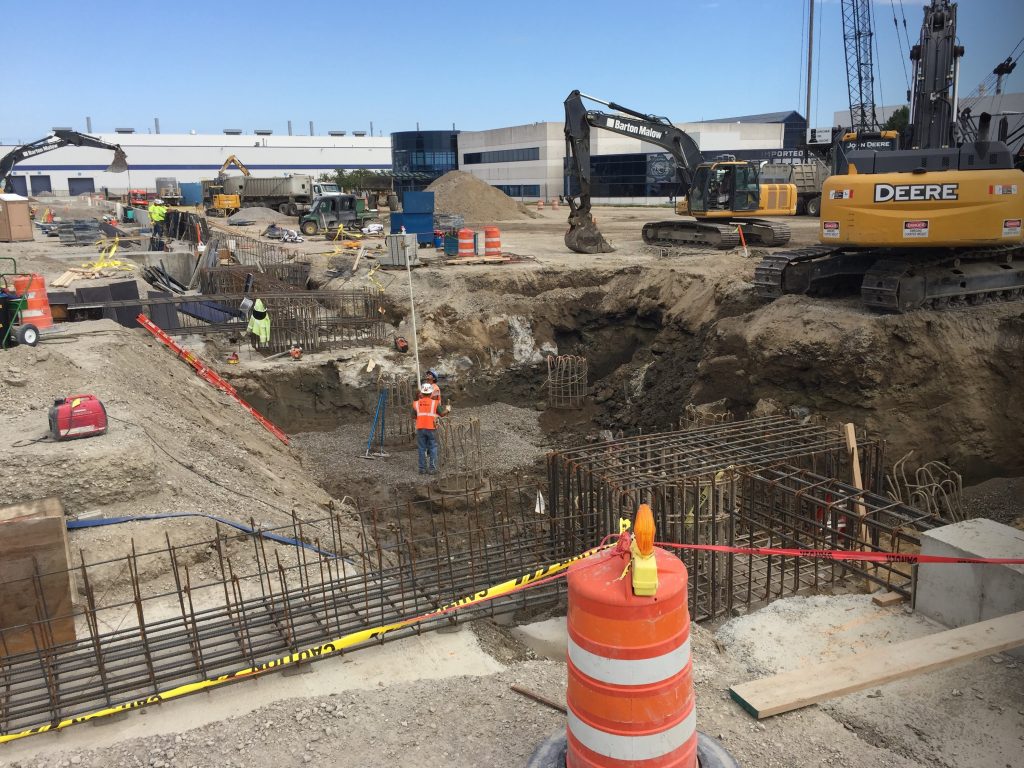 Construction of our new assembly plant in Detroit has been a journey of discovery.

For the past several months, construction crews have found parts of old house basements, street pavement, and massive old stamping plant foundations and steel beams. Since last spring, crews have removed more than 830,000 cubic feet of dirt and built a nearly 1.5-mile long, 10-foot high concrete sound wall (15 feet in some places) in addition to creating three water-retention ponds that will hold more than 500,000 cubic feet of water.

“The biggest obstacle during construction, so far, has been the removal of massive concrete foundations that were once part of the old Michigan Stamping Plant, which later became part of the old Chrysler Mack Avenue Stamping Plant,” Ryan Oswald, Building Project Manager, said. “During construction of the new plant’s paint shop, contractors were continually digging through thick, heavily reinforced concrete walls that contained embedded steel beams and plates.

The company was aware that the massive, old dirt berms along the west side of St. Jean Street were built over what used to be dozens of old homes, Oswald noted. The berms were built there in the late 1980s as part of the FCA Jefferson North Assembly Plant construction project.

“For this reason, we used historical maps and (ALTA) surveys to identify the likely locations of those old basements, and we designed our underground storm piping and underground detention systems to avoid them,” Oswald said. “In some locations, we did find old brick/block, but for the most part we were successful in avoiding the old residential basements.”

An ALTA survey is a detailed survey performed by a registered licensed surveyor, prepared in accordance with the standards specified by the American Land Title Association (ALTA) and the American Congress of Surveying and Mapping (ACSM).

Oswald said crews have not encountered any old street car rails in construction as the city apparently removed all of them during repaving projects over the years. However, the company is reusing part of the existing St. Jean Street pavement as part of the employee parking lot and a large trailer marshalling lot.

In February, FCA announced the investment to build the first new assembly plant in Detroit in nearly 30 years, bringing 3,850 new jobs to the city. The new plant will produce the next-generation Jeep® Grand Cherokee and all-new, three-row, full-size Jeep SUV, along with their electrified models.