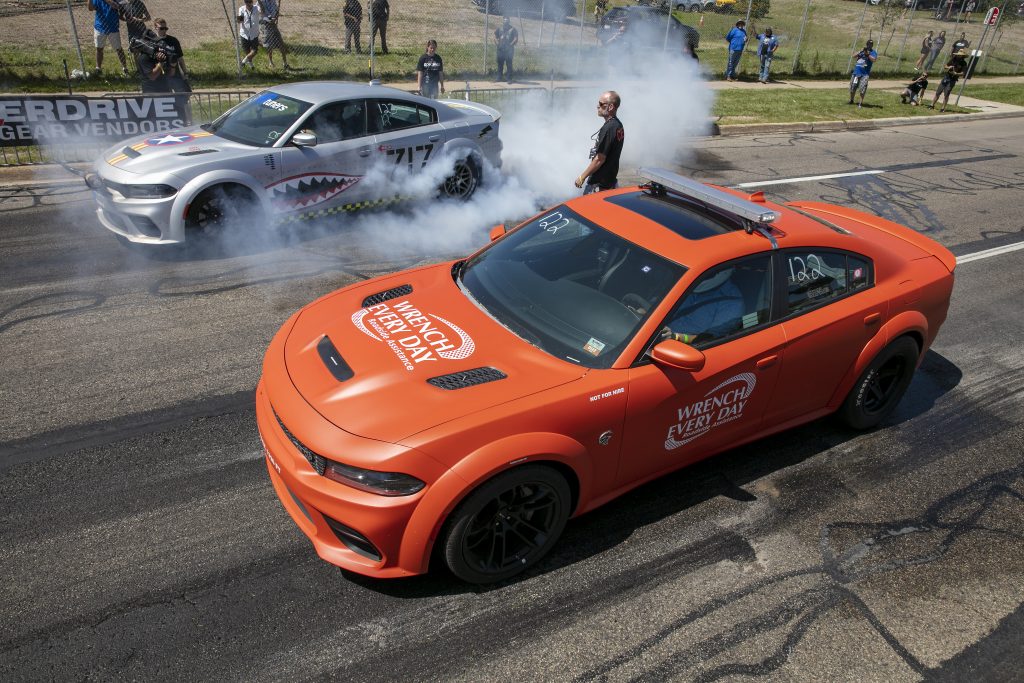 July 13, 2022 , Auburn Hills, Mich. – Tickets are now available for the seventh edition of MotorTrend Presents Roadkill Nights Powered by Dodge. The annual event is leveling up from years past by adding a new twist on last year’s popular online automotive builder showdown, won by drag racer, mechanic and automotive content creator Alex Taylor. This year, competitors will use Dodge Direct Connection parts in building a drag-race machine under a tight deadline before bringing it to Woodward Avenue to go head-to-head on the strip.

The Dodge brand and MotorTrend announced today the all-star lineup of automotive personalities who will compete in a bracket-style showdown where the winner will go up against Taylor in the Dodge Direct Connection Grudge Match. Automotive content creators will include returning favorites Tavarish, Westen Champlin and throtl, plus five new additions to the cast: Christina Roki, Demonology, Corruptt Builds, Collete Davis and David Patterson. Enthusiasts can follow the Dodge Direct Connection Grudge Match build projects at www.dodgegarage.com/roadkill-nights-2022.

“The Grudge Match was a hit last year, so we’re bringing it back to Roadkill Nights. But this time, we’re giving competitors Direct Connection parts to use as building blocks in assembling their race cars,” said Tim Kuniskis, Dodge brand chief executive officer – Stellantis. “It’ll be fun to see if Alex can defend her crown against a mix of returning racers and new blood. Last year, everyone learned that getting traction is the key to street racing on Woodward Avenue. So this year, we’re upping the ante. All competitors will be running a Direct Connection crate engine that they can modify however they want, but they will all have the added challenge of competing with a Direct Connection six-speed manual transmission.”

“I’m looking forward to having the opportunity to defend my championship from last year,” said Taylor. “Everyone participating brings such a unique style to their racing and building – it will be thrilling to see the power and plans they each have for the challenge.”

Roadkill Nights Powered by Dodge brings legal street drag racing to Woodward Avenue, as well as a classic and modern muscle car show, exhilarating interactive experiences and immersive, fun-filled activities at M1 Concourse in Pontiac, Michigan. Also returning are Dodge thrill and drift rides in Challenger and Charger SRT Hellcats, where participants can go for the rides of their lives on the M1 Concourse. A Direct Connection Alley area at the event will include a display trailer with Dodge Challenger SRT Demon virtual drag race simulators, Direct Connection crate engines and parts on display, and much more.

MotorTrend Presents Roadkill Nights Powered by Dodge also kicks off the multi-day Dodge Speed Week event, scheduled for August 12-20, 2022, with a press conference on August 12 and the Roadkill Nights main event on August 13. Dodge Speed Week continues with three consecutive days of worldwide product reveals at M1 Concourse on August 15-17, and wraps up with a Dodge brand display, in conjunction with the Modern Street HEMI Shootout group, on August 20 during Dream Cruise weekend.

Celebrity appearances will also be on tap for Roadkill Nights, including David Freiburger, Mike Finnegan, Cristy Lee, Steve Magnante and KJ Jones. Dodge Chief Donut Maker Preston Patterson, who won a one-year role as the ultimate Dodge brand ambassador in May, will also serve as an emcee at the event.

“One of the events I’ve been most looking forward to since winning the role of Dodge Chief Donut Maker is Roadkill Nights,” said Patterson. “I know it’s one of the most exciting events of the year for Dodge, and I can’t wait to see it in person. I hope I get the chance to do a little legal street racing myself on Woodward Avenue.”

The Mopar Career Automotive Program (CAP) will also be on-site with an informational tent at the Roadkill Nights event. Designed to develop the next generation of highly skilled service technicians, Mopar CAP seeks to recruit students into a program that offers teaching and technical curriculum at more than 100 colleges around the country. Skills learned in the program can apply directly to open service technician positions at Chrysler, Dodge, Jeep, Ram and Fiat dealerships.

Gates will be open for MotorTrend Presents Roadkill Nights Powered by Dodge on Saturday, August 13, from 10 a.m. to 9 p.m. Drag racing starts at 11 a.m. The event can be viewed via livestream from 11 a.m. to 9 p.m. Fans can experience the livestream feed across a variety of channels, including: Dodge.com, Dodge brand YouTube channel, DodgeGarage.com, MotorTrend OnDemand, and MotorTrend YouTube channel (live and replay).

Automotive super fans will be able to attend and take part in this year’s ultimate car festival. Final capacity limits, rules and regulations will be in accordance with state and local health department guidelines. Full details for spectator tickets, discounted Pontiac resident tickets, car show registration, participant application for drag racing and an extensive range of packages can be found now at https://www.motortrend.com/events/roadkill-nights/.

Street racing can have serious legal and safety risks. Both ROADKILL and Dodge want enthusiasts to enjoy performance driving in a safe, controlled environment, run by professionals with vehicle safety inspections, driver evaluations and track safety.

MotorTrend Group, a Warner Bros. Discovery company, is the largest automotive media company in the world, bringing together Warner Bros. Discovery’s MotorTrend TV and a vast automotive digital, direct-to-consumer, social, and live event portfolio, including MOTOR TREND, HOT ROD, ROADKILL, AUTOMOBILE and more than 20 other industry-leading brands. With a monthly audience of 26 million across web, TV and print, and 110 million social followers, culminating in 1.3 billion monthly impressions across all platforms, MotorTrend Group encompasses television’s #1 network for automotive fans, a leading automotive YouTube Channel and MotorTrend+, the only subscription streaming service dedicated entirely to the motoring world. MotorTrend Group serves to embrace, entertain and empower the motoring world.Dodge//SRT
For more than 100 years, the Dodge brand has carried on the spirit of brothers John and Horace Dodge. Their influence continues today as Dodge shifts into high gear with muscle cars and SUVs that deliver unrivaled performance in each of the segments where they compete.

Dodge drives forward as a pure performance brand, offering SRT versions of every model across the lineup. For the 2022 model year, Dodge delivers the drag-strip dominating 807-horsepower Dodge Challenger SRT Super Stock, the 797-horsepower Dodge Charger SRT Redeye, the most powerful and fastest mass-produced sedan in the world, and the Dodge Durango SRT 392, America’s fastest, most powerful and most capable three-row SUV. Combined, these three muscle cars make Dodge the industry’s most powerful brand, offering more horsepower than any other American brand across its entire lineup.