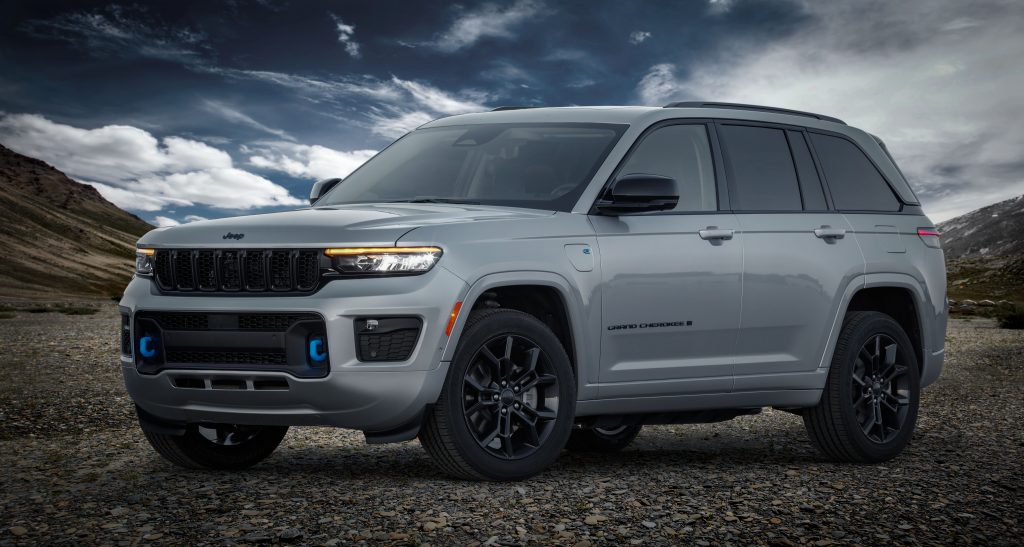 September 14, 2022 , Auburn Hills, Mich. – The Jeep® brand is celebrating the 30th Anniversary of most awarded SUV ever with the debut of the 2023 Jeep Grand Cherokee 4xe 30th Anniversary edition today at the Detroit Auto Show at Huntington Place hosted by the NAIAS.

“When the original Jeep Grand Cherokee debuted in 1992 by famously crashing through the glass at Cobo Hall, it literally shattered expectations and redefined what a premium SUV could be,” said Jim Morrison, senior vice president and head of Jeep brand North America. “Three decades later and more than 7 million Grand Cherokees sold, the most awarded SUV ever is still forging new ground with the electrified plug-in-hybrid 4xe model. The Grand Cherokee 4xe 30th Anniversary edition underscores how far the Grand Cherokee has come and is yet another example of the Jeep brand’s goal to be the electrification leader in SUVs.”

The 2023 Jeep Grand Cherokee 4xe 30th Anniversary special edition represents the most technologically advanced and 4×4-capable Jeep Grand Cherokee yet, delivering 25 miles of all-electric range and 56 miles per gallon equivalent (MPGe) from a hybrid system that delivers 375 hp and 470 lb.-ft. of torque and max towing of 6,000 lbs.

Available for a limited time, the 2023 Jeep Grand Cherokee 4xe 30th Anniversary edition has a U.S. manufacturer’s suggested retail price (MSRP) of $4,700 for the package and opens for orders later this year, with vehicles scheduled to begin arriving to Jeep dealers by early 2023.

The 2023 Jeep Grand Cherokee 4xe 30th Anniversary edition will be on display at the 2022 North American International Auto Show in Detroit during public days, Sept. 17-25, 2022.

The 2023 Grand Cherokee 4xe offers 25 miles of all-electric range and 56 MPGe from a PHEV system that delivers 375 hp, 470 lb.-ft. of torque and max towing of 6,000 lbs. The Grand Cherokee 4xe comes standard with a two-speed transfer case, 2.72:1 low-range gear ratio and 47.4:1 crawl ratio. The Trail Rated Grand Cherokee 4xe delivers up to 10.9 inches of ground clearance and 24 inches of water-fording capability. The Grand Cherokee 4xe’s E Selec modes – Hybrid, Electric and eSave – allow the 4xe driver to tailor the hybrid powertrain to best suit each trip, whether it be commuting, off-roading or long-distance travel.

Established legacy of luxurious, capable Jeep SUVs
Built on more than 80 years of legendary heritage, every Jeep vehicle has a remarkable lineage and unique personality. Each is authentic with class-leading capability and versatility. The Jeep Grand Cherokee is no exception. The debut of the original Grand Cherokee set the industry benchmark for luxury and capability and ushered in five celebrated generations that have made the Grand Cherokee the most awarded SUV in history.

First-generation Jeep Grand Cherokee (ZJ): 1993-1998
The Jeep Grand Cherokee made its famous debut by crashing through the convention center entrance at the North American International Auto Show in Detroit on January 7, 1992. The first SUV equipped with a driver-side air bag, it set new standards for on-road ride, handling and comfort in an SUV. The 105.9-inch-wheelbase Grand Cherokee took refinement to a new level. A new Quadra-Coil suspension featured a coil/multilink configuration. A 5.2-liter V-8 engine was offered as an option and a Dana 44 rear axle was available for some models.

Second-generation Jeep Grand Cherokee (WJ): 1999-2004
The WJ was a complete redesign. Only 127 parts carried over from its predecessor. A larger cabin with more room for rear passengers and larger doors increased comfort, and location of the controls for the driver were more conveniently located. A new feature included the automatic four-wheel-drive option (Quadra-Drive) with a new transfer case. This two-speed, chain-driven transfer case used a gerotor, a clutch pack coupled to a hydraulic pump, to transfer torque between the front and rear axles. The transfer case contained three modes: 4-Lo, Neutral and 4-All Time (with 100 percent of torque distributed to the rear axle under normal conditions).

Fourth-generation Jeep Grand Cherokee (WK2): 2011-2022
All-new for 2011 and more than 4 million sales after the introduction of the first Grand Cherokee, Jeep improved the formula to deliver an ideal blend of on-road refinement and off-road capability, with improved fuel economy, a world-class interior, a sleek new exterior design and a host of safety and technology features. A Trailhawk model was introduced in 2017 with standard Quadra-Lift air suspension, the Quadra-Drive II 4×4 system, all-terrain tires and a Skid Plate Package. The new Trackhawk was released as the quickest and most powerful SUV ever. It boasted a supercharged 6.2-liter HEMI V-8 engine, modified engine cooling, high-performance Brembo brake system and Launch mode for incredible track performance.

Proudly built in the Motor City
The Jefferson North Assembly Plant in Detroit has been the production home of the Jeep Grand Cherokee for 30 years. In 2021, production launched at a second all-new assembly plant in the city to help meet the demand for the legendary SUV and expand its product offerings, including an electrified model. The two plants now operate as the Detroit Assembly Complex.

With an investment of $1.6 billion, Stellantis converted the two plants that comprised the former Mack Avenue Engine Complex and built a new paint shop to become the assembly site for the fifth-generation Jeep Grand Cherokee, Grand Cherokee L and the PHEV Grand Cherokee 4xe model. Additionally, the company committed to putting Detroiters first in the application process for the 3,850 new jobs that were created. As of July 31, 2022, 3,292 Detroiters have been hired to work at Mack, with nearly 350 from the three zip codes surrounding the plant.

Jeep Brand
Built on more than 80 years of legendary heritage, Jeep is the authentic SUV brand that brings capability, craftsmanship and versatility to people who seek extraordinary journeys. The Jeep brand delivers an open invitation to live life to the fullest by offering a broad portfolio of vehicles that continues to provide owners with a sense of safety and security to handle any journey with confidence. The Jeep vehicle range consists of the Cherokee, Compass, Gladiator, Grand Cherokee, new three-row Grand Cherokee L, Grand Cherokee 4xe, Renegade and Wrangler and Wrangler 4xe. Jeep Wave, a premium owner loyalty and customer care program that is available to the entire Jeep 4×4 lineup, is filled with benefits and exclusive perks to deliver Jeep brand owners the utmost care and dedicated 24/7 support. The legendary Jeep brand’s off-road capability is enhanced by a global electrification initiative that is transforming 4xe into new 4×4 in pursuit of the brand’s vision of accomplishing Zero Emission Freedom. All Jeep brand vehicles will offer an electrified variant by 2025.