Community
Fighting Hunger One Can at a Time 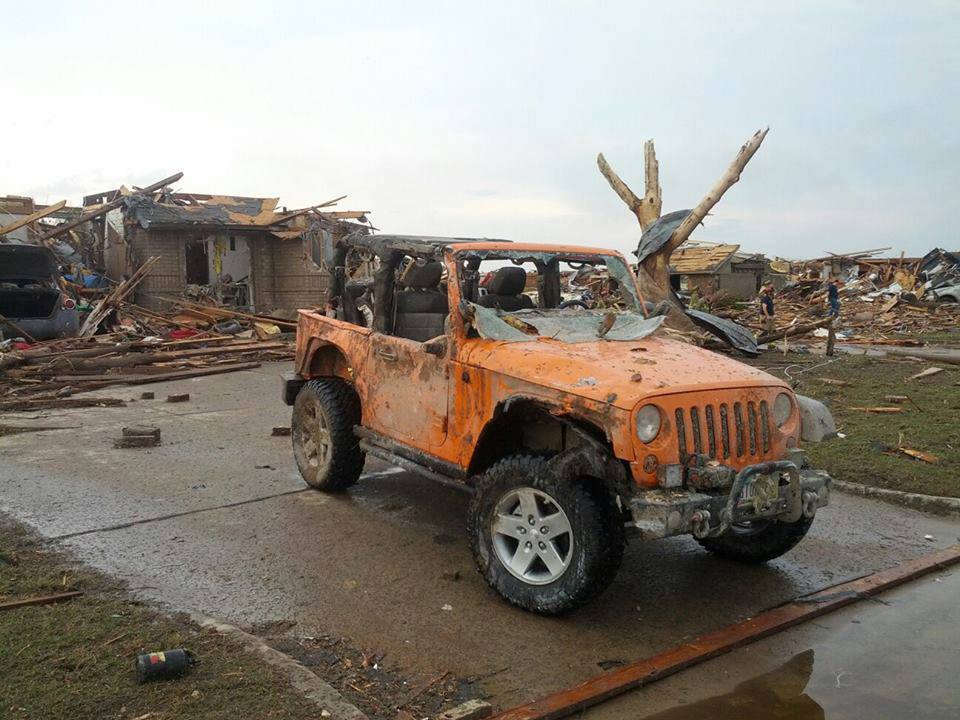 There’s something special about the communities that develop around our brands. There’s a strong sense of unity and of looking out for each other.

So, it’s no surprise that when the Jeep® Wrangler owned by Bryan Hutton was damaged during the May 20, 2013, EF-5 tornado that struck Moore, Okla., the Jeep community came through after learning about Hutton’s selfless acts that day.

‘It’s just what Oklahomans do’

Hutton and his 2½-year-old son were visiting family in Moore, Okla., when the tornado hit. (Hutton’s wife Brenda, a USAF Major, was in Afghanistan at the time.)

Upon exiting a neighbor’s shelter, where Hutton, his son and others rode out the storm, Hutton said he was in “awe.”

“When I opened the shelter door, the storm was only a block or so passed us. There was large debris being tossed out toward us. I remember feeling very alone in those first few seconds due to the lack of life signs in my immediate vicinity. It looked like a scene from an apocalyptic summer blockbuster movie, very surreal. I immediately set off to help people from that moment.”

Bryan Hutton’s 2012 Jeep Wrangler Rubicon was damaged from the Moore, Okla., tornado — but it was unstoppable as Bryan used it to help remove debris and assist those in need after the tragic storm. (Image courtest of Bryan Hutton)

Hutton was able to get his 2012 Jeep Wrangler Rubicon, nicknamed Stomper, out of his parents’ garage. Despite damage to it, Hutton and Stomper worked tirelessly and without fail to rescue people from the debris that had fallen around them. Stomper cleared roads and helped transport those who were injured.

“Setting off to help others came naturally,” Hutton said. “It’s just what Oklahomans do. The entire time that we were in the neighbors’ below-ground shelter, the only thing I could think of was everyone that was above ground at the mercy of such a powerful storm. I actually felt guilty for being safe.”

Zimmer Chrysler Dodge Jeep Ram, along with Crocker Off-Road Performance, Kustom Koachworks and many others, have donated time and/or equipment to rebuild Stomper, as a way of saying thanks to Hutton for his efforts.

“Bryan’s story is simply amazing,” said Zimmer CDJR Internet/Social Media Manager Lee Fogel. “I was following the story on Facebook and, after seeing the aftermarket community rally to save Stomper, I approached Catherine Zimmer, our CEO, and told her what was going on and asked if we could help out.

“We knew that at some point they would need OE parts. Catherine and I felt very strongly about their story and wanted to do our part as a respected franchise for CDJR. So, she said, ‘Let’s help out.’”

Hutton added that, “The outpouring of support has been incredible.

“When Camp Crocker first called and told me what the plan was, I told him to find someone who didn’t have insurance to do a rebuild for. It was then that Crocker told me of how Stomper’s story was already inspiring people from all over the country to help the good people of Moore. Once I had seen this myself, I agreed to save Stomper.”

For details on Hutton’s deeds and the effort to rebuid Stomper, see C4x4’ story or the Kustom Koachworks blog.

See Facebook for the latest on The Rebuilding of Stomper.

If you’re headed to SEMA 2013 next month, you’ll be able to see Hutton’s rebuilt Stomper for yourself at Omix-ADA/Rugged Ridge, South Hall. Above is an illustration, courtesy of Joel Bewley / Bewley Design Lab.