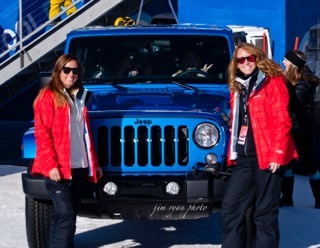 After traversing across the Rockies, Brittany and I decided that Aspen would be the ideal place to track the Yeti’s latest footprints. We packed up our Jeep® Wrangler and planned an adventure in the upper Roaring Fork Valley.

We spent our first night at the elegant, yet character-driven Hotel Jerome. The Hotel Jerome is the premier retreat. It has been a central part of the Aspen community dating back over 120 years when silver prospecting defined the upper Roaring Fork Valley. The mines of Aspen produced nearly $100 million in silver ore, one of the richest lodes in the world.

If Ralph and Ricky Lauren sought to rendezvous with James Bond, the Hotel Jerome’s new Living Room would be the appropriate scene for the awaiting martini and local microbrew.

The next morning we sat down in the Hotel Jerome’s formal dining room, the Prospect restaurant. Sharing pancakes drizzled in blueberry-orange compote and a scramble of thickly sliced ham, white mushroom and Chevre cheese, we gingerly ate our rich meal, knowing we were venturing to higher ground shortly.

After breakfast, we jumped in the Wrangler and headed to Ajax Mountain to meet with our Aspen Center For Environmental Studies snowshoeing naturalist, Courtland. She took us on a two-hour trek weaving through the fir and spruce forests pointing out animal tracks…some which could have been made by the mysterious Yeti, who is known to yodel on full moon nights.

n the evening, we were welcomed with a dusting of fresh snow. Though the outside world transformed into a post card, we looked a little snowed on as we approached the lobby of our new night home; the whimsical Sky Hotel. We arrived just in time to enjoy the “best après ski in Aspen.”

The lobby itself is much to take in. As a Kimpton property, the boutique Sky Hotel enjoys a theme unique to its environment. It’s location is just steps from Aspen’s Ajax Mountain, and centrally located it’s “see-and-be-scene” theme is riddled with a bubbly personality.

Brittany and I put on our animal print robes (as provided in each guest’s room) to join around the low white leather sofas for the nightly hosted hot toddies, wine, and hors d’oeuvres hour.

Before we departed Aspen, we wanted one more glimpse of the mountain, in hopes of spotting the yodeling Yeti. We jumped in the Jeep and headed to Snowmass, where we bumped into Courtland, our naturalist from the snowshoe adventure. She said we were in the perfect location to spot fresh Yeti tracks.

There we met Ben, who greeted us with a warm smile and fit us for our ski gear. He mentioned that our ski instructor would find us in the chalet. Within minutes, we met our very entertaining ski instructor, “Kermit.”

Throughout the day, we laughed to his jokes, “traversed” across the mountain, and received new nicknames. Brittany has been named “Happy Feet” as she does a killer job on her quick stops. On the other had, I’ve been given the name of the “The Galloping Goose”…

Aspen is such a beautiful place! The next time you hear the yodel of the Yeti…head to Aspen in your Jeep! You just never know what you’ll find!

“Have Fun Out There!”