Jeep
The Jeep Girls kick-off the 75th anniversary of Jeep! 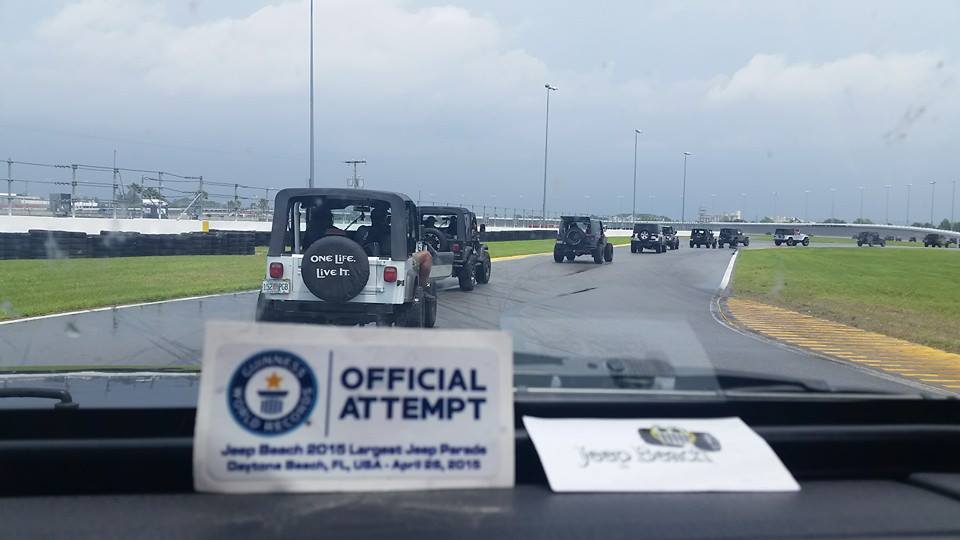 View from the line up of the April 26, 2015, largest parade of Jeep vehicles Guinness World Record. Image courtesy of Danielle Hearon Casey, from the Jeep Beach Facebook Page.

Just a sampling of the nearly 1900 Jeep vehicles that set the largest parade of Jeep vehicles Guinness World Record. Image courtesy of Debbie Currier, from the Jeep Beach Facebook page.

Attendees to the 12th annual Jeep Beach smashed the world record for the largest parade of Jeep vehicles when 1,846 lined up Sunday and paraded around the Daytona International Speedway.

“The World Record number was right where we thought it would be,” one of the Jeep Beach volunteers, Cathal Duffy, told us. “Wranglers dominated but we definitely had representation from nearly every Jeep ever made.”

The previous record was 1,106, set by attendees to the annual Bantam Jeep Festival in 2011.

“If they break the record this summer, we’ll definitely look at breaking it again,” Duffy said. “It’s a friendly competition.”

Jeep Beach, organized by Mid Florida Jeep Club, has been growing every year, since it started with about 150 Jeep vehicles, Duffy said, and has become “significantly larger every year.”

For this year’s event, April 22-26, more than 2,400 vehicles were registered and about 10,000-15,000 people attended. This was the first year the Jeep Beach Jeep parade was done at the Daytona Speedway, as it outgrew the beach, Duffy said.

While Jeep Beach is, obviously, about Jeep owners getting together to share their common 4×4 bonds, Duffy said the real purpose of Jeep Beach is bigger than that.

Jeep Beach is a fundraiser, with proceeds going to 5-6 local charities. Last year, Duffy said, Jeep Beach raised more than $150,000. There’s no figure yet for this year’s event.

“We’re a charity organization that happens to drive Jeeps.”

Note: For a first-hand view of what it was like driving in the Jeep parade, here’s this video from budmanm3.