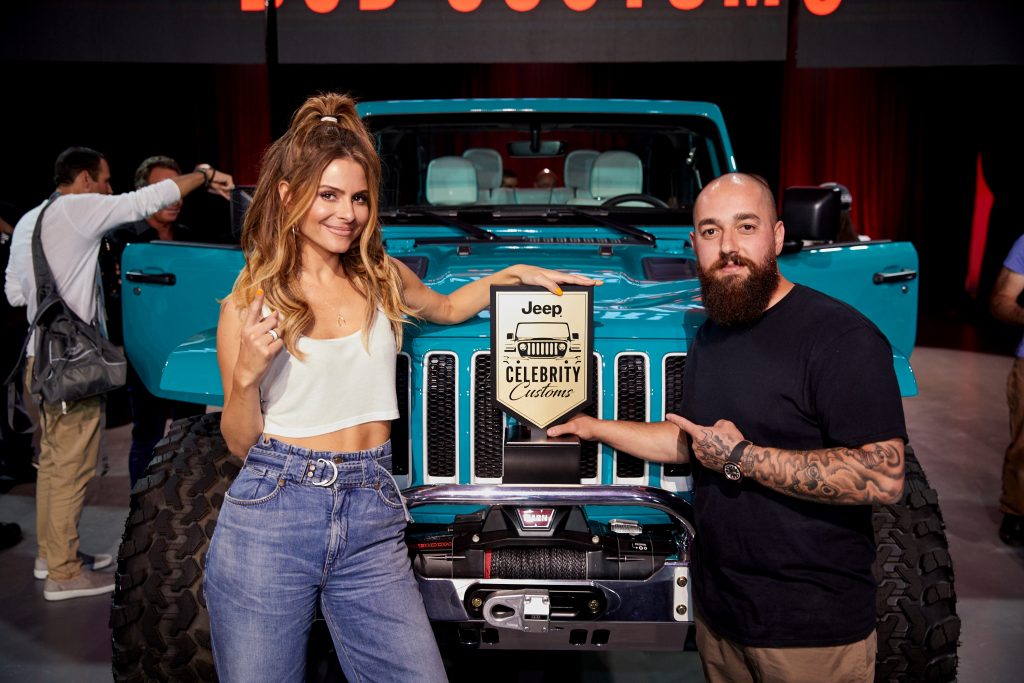 Celebrities from the world of sport, media and food worked with a trio of talented customizers to create three unique versions of the all-new 2018 Jeep® Wrangler in the first ever “Jeep Wrangler Celebrity Customs” web series competition.

Over the course of six webisodes, Alex Rodriguez, Maria Menounos, and The Infatuation’s Andrew Steinthal and Chris Stang guided customizers as they personalized each Jeep Wrangler and had their work chronicled in the Jeep brand’s first-ever web series competition “Jeep Wrangler Celebrity Customs,” hosted by former NBA standout Jalen Rose.

After six webisodes, and weeks of hard work and collaboration, the teams of celebrities and customizers gathered in Los Angeles for the reveal and judging of their Wranglers. Each Jeep Wrangler was judged in three categories: “Stoplight Quality,” “Captivating Interiors” and “Authentically Wrangler.”

Following a tight competition, Menounos and DCD Customs won the contest and was awarded the Wrangler Golden Grille Award. 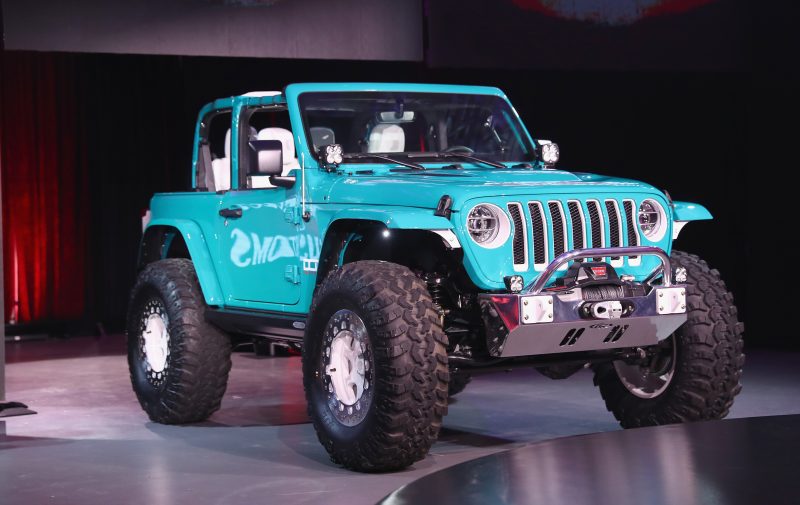 “It was a close contest, coming down to the final vote,” said Menounos. “Alex definitely brought his A-game with West Coast Customs, as did Andrew and Chris with AutoCraft NYC, but I knew from the beginning that David Tonapetyan and DCD Customs had what it takes to help me build my perfect Jeep Wrangler. I’m beyond excited to be the first-ever Wrangler Golden Grille winner!” 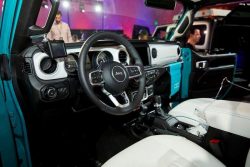 Her two-door 2018 Jeep Wrangler has an old-school vibe with a custom light blue paint job and a retro-white interior. There’s also a dog bed and treat holder in the vehicle along with a makeup compact on the steering wheel. The team DCD Customs also added Menounos’ signature to the dashboard for further personalization.

Stang and Steinthal teamed up with AutoCraft NYC to create a distinct Wrangler that would represent The Infatuation, a social and digital discovery platform designed to find a restaurant for the perfect situation. 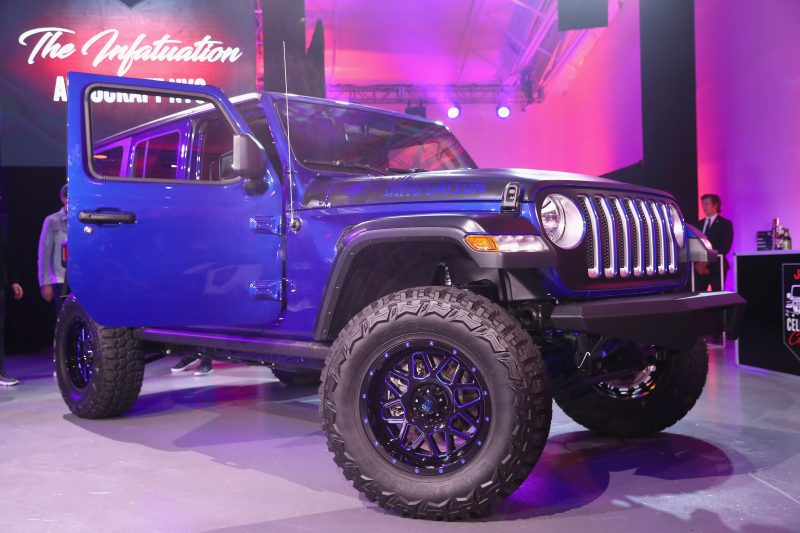 A custom 2018 Jeep Wrangler designed by the founders of The Infatuation is on display during The Jeep Wrangler Celebrity Customs Reveal Event at Optimist Studios on September 25, 2018 in Los Angeles, California. (Photo by Joe Scarnici/Getty Images for Jeep)

Their Jeep Wrangler has The Infatuation’s logo on the hood, 35-inch tires and iPads in the visors. The feature that set this Wrangler apart from the others is a soft-serve ice cream machine built into the back of the vehicle. 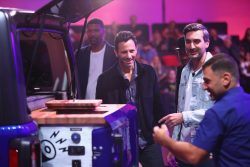 Chris Stang, Stefano Loria and Andrew Steinthal attend The Jeep Wrangler Celebrity Customs Reveal Event at Optimist Studios on September 25, 2018 in Los Angeles, California. They are checking out the ice cream machine built into the Wrangler. (Photo by Joe Scarnici/Getty Images for Jeep)

Major League All-Star Alex Rodriguez shared his vision for his Jeep Wrangler with West Coast Customs to create an aggressive-looking vehicle. Rodriguez’s Wrangler received a satin black wrap, 26-inch wheels, a Grumper over the front grille and a ViCrowl over the front windshield. 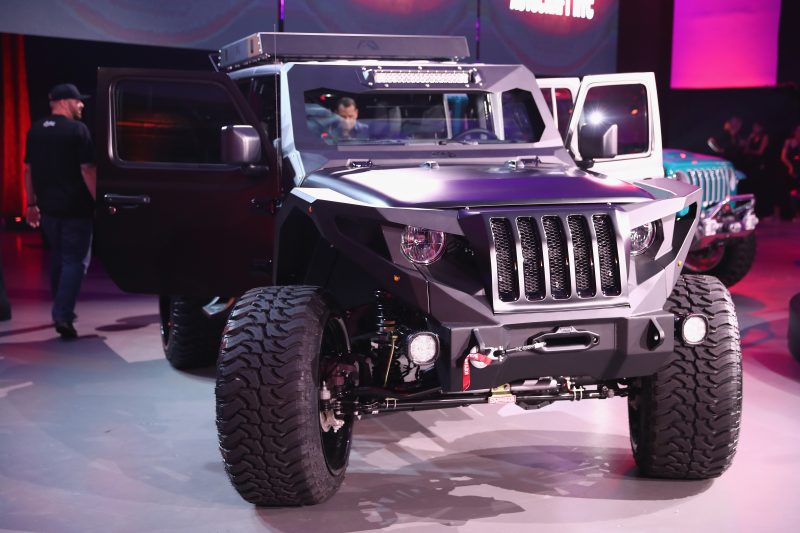 The inside of the Jeep Wrangler was further personalized with a humidor for Rodriguez’s cigars, LED lighting, an iPad Pro embedded on the dash and a sound system that rivals a nightclub.

These customizations are the latest examples of how customers can personalize the iconic Jeep Wrangler. For the “Jeep Wrangler Celebrity Customs” competition, professional customizers utilized Jeep Performance Parts for their showcase vehicles.

To learn more about personalizing a Jeep Wrangler or for more information about the all-new 2018 Jeep Wrangler, visit Jeep.com.