The newest version of the iconic Jeep® Wrangler is being built in the historic home of the brand on an assembly line equipped with the latest technology.

With the launch of the all-new 2018 Jeep Wrangler, Toledo carries on the tradition started in 1941 of building the original 4×4.

Preparations to produce the next-generation Jeep Wrangler began in 2016 when FCA US announced that it would invest $700 million in the Toledo North Assembly Plant and create 700 new jobs.

Production of the new Wrangler began in 2017, and has increased to the point where the plant is now running six, sometimes seven, days a week. With the plant humming at this pace, team members have built more than 200,000 of the new Wranglers so far this year and have shipped them around the world. 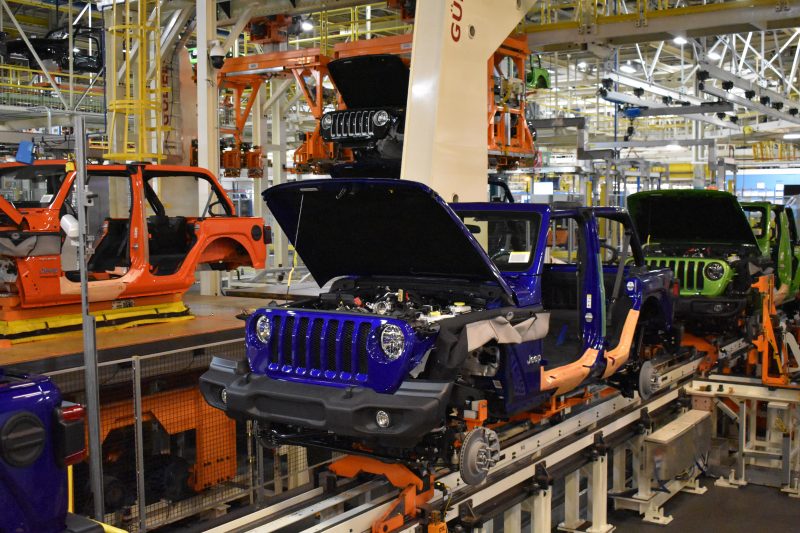 It takes nearly 24 hours for the Wrangler to be built from start to finish. The assembly line includes a number of new ergonomic, cutting-edge features, like the Chassis Automated Guided Vehicle System. These battery-free self-guided carts, which can carry up to 3,500 lbs., transport the Wrangler’s all-important chassis down the line to be built up. They can travel at speeds of up to 120 ft./min with stopping accuracy within 0.25 inches.

Along the route traversed by these carts is a stop at the Robotic Frame VIN Etch, where a robot etches the specific make and model of each vehicle into the chassis. This is important as the Wrangler has 12 frame variations and is shipped to 105 markets. With each country having unique requirements for VIN marking, this system was developed to accommodate all market requirements and to ensure quality.

Watch this system in action:

Following the etching, the chassis receives suspension, powertrain and other components. It then moves to the Robotic Frame Transfer where the largest industrial robot available, with a maximum load capacity of 5,070 lbs. — equal to the weight of a four-door Wrangler with wheels on — picks up the chassis and moves it along the assembly line.

Here’s the robot in action:

Robots also play an important role in the Glass Cell. In this station, a robot picks up the windshield and applies a urethane adhesive, which is inspected with an Infrared Vision System for quality and conformance, then the windshield is precisely placed on the body of a Wrangler. This automated system ensures a better seal to eliminate water leaks along with wind and road noise.

Here are the robots in the Glass Cell in action:

“We increase productivity by eliminating wasted movement,” said Kevin Monahan, workplace pillar lead. “How do we do that? We treat the operator like a surgeon by having the parts right where the operator needs them at the point of install.”

Watch as the Wrangler rotates during its trip along the assembly line:

Near the end of the assembly line is where the chassis and body come together in a fully automated decking process with no manual intervention. The process allows for precision alignment between the body and frame, and automatically secures bolts to the proper specification.

The video below captures this automated process: