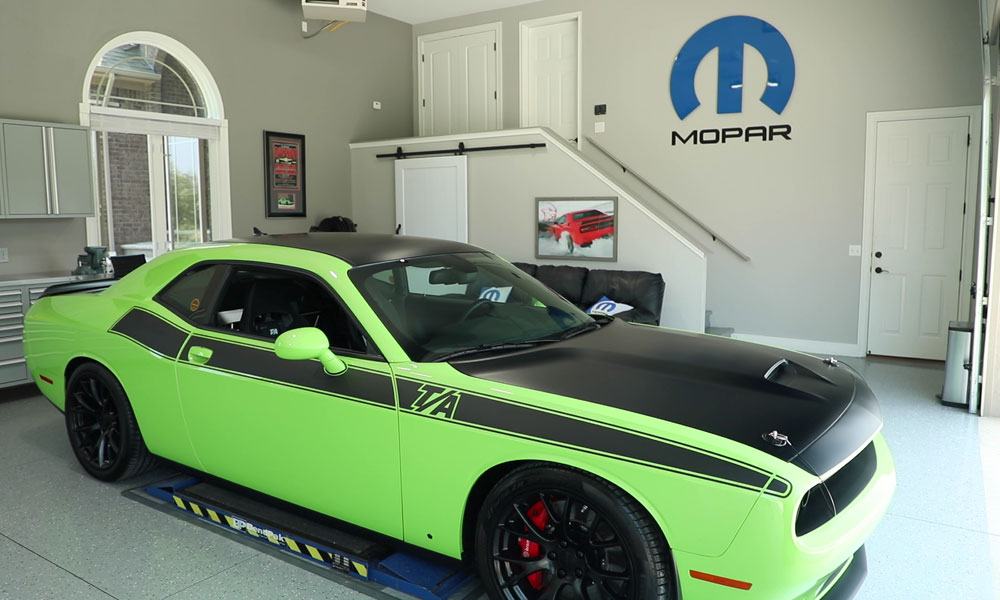 Michael Parent is a longtime fan of cars that fall under the Mopar banner. As far back as his high school days in the 1980s,he’s driven, owned and wrenched on several cars, with a 1968 Plymouth Roadrunner and ’68 Dodge Charger R/T still strong in his memory.

But nothing had caught Parent’s eye quite like the Sublime Green Dodge Challenger T/A concept unveiled at the 2014 SEMA Show in Las Vegas. The concept paid homage to the 1970 Dodge Challenger T/A racing car with its signature blacked-out hood and black T/A stripe on the sides.

It was love at first sight. Parent wanted that car. But FCA doesn’t sell its concepts. So at his wife’s urging, Parent set out to create his own modern Challenger T/A – a car you can see in the Dodge Show ‘n’ Shine section at this year’s Roadkill Nights Powered by Dodge in Pontiac, Michigan, on Aug. 9-10.

He had the first building block. Enticed by the addition of the Scat Pack package for the 2015 model year, Parent put his money down for a Sublime Green Dodge Challenger, fitted with the 392 HEMI® V-8 and six-speed manual transmission, on the first day that dealers could accept orders.

Fans of Dodge’s modern muscle cars know that the brand added a 392 T/A model that resembles the SEMA concept car to the Challenger lineup in the 2017 model year. But Parent had no idea of those plans.

Instead, he and his wife tracked the concept car to its public appearances at auto shows and enthusiast gatherings, taking pictures and video of every angle possible, inside and out. Parent went so far as to put a dollar bill up against the car to give him a reference of scale and location for various items such as the A-line stripes.

As fall turned to winter in 2015, Parent put his Challenger into his spotless, fully equipped garage and, armed with his photos, got to work. The unique elements of the SEMA concept meant Parent would have to fabricate most of the parts he needed. That list includes:

Parent says he now has a good understanding of the costs of building a concept car.

In spring 2016, Parent’s SEMA tribute car made its debut at a meeting of the Detroit Area Modern Mopar club (he’s a member) held at the former Chrysler Museum on the FCA US campus in Auburn Hills.

How good did the tribute car look? Some FCA executives at the event mistook Parent’s car for the actual SEMA concept. Parent has since earned trophies for the Challenger at a number of car shows.

This will be the third year Parent, who is a big drag racing fan, has brought his SEMA Tribute Challenger to Roadkill Nights.

“Everybody likes the car, especially because this year of Sublime has some pearl in it, which really makes it shine,” Parent says. “The interior always gets a lot of attention when people see the Viper seats, the rear-seat delete and the pistol-grip shifter.”

The Challenger isn’t a garage queen and is driven regularly, Parent says. But it does reside in a palatial garage space complete with a pair of lifts, spotless floors, beverage cooler and a couch.

What’s next? Parent says he’s thinking of tracking down a 1970 Dodge Challenger R/T 440 Six Pack with a four-speed manual.

Maybe he’ll spot one he likes at Roadkill Nights Powered by Dodge.