Dodge,Engineering
Watch out for the ‘Speed Trap:’ Dodge//SRT takes on One Lap of America again, this year in Dodge Durango SRT Pursuit concept 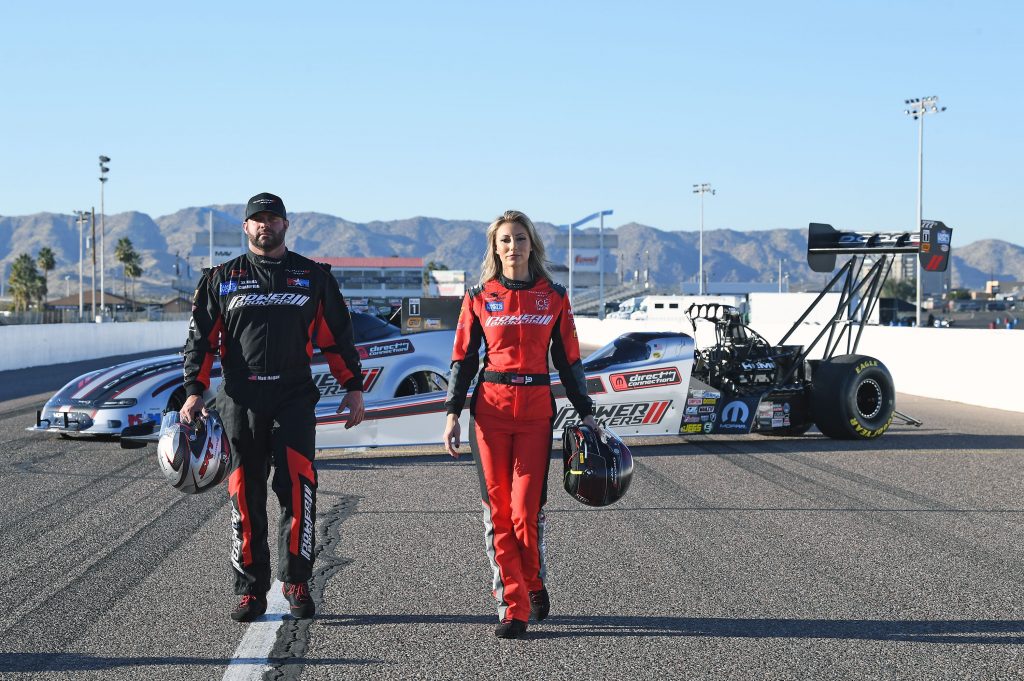 The new Dodge Power Brokers program will roll out ready to serve as the exclusive source for all new Direct Connection, Dodge’s factory-backed performance parts program, and equipped with staff trained to deliver a performance-focused customer service experience.

“Dodge//SRT performance enthusiasts have plenty to look forward to this NHRA season as we launch our new partnership with Tony Stewart Racing,” said Tim Kuniskis, Dodge Brand CEO – Stellantis. “Fans will see the new Dodge Power Brokers and Direct Connection colors for us this year, and also have the chance to check out Direct Connection factory-backed performance products at the display in the Manufacturers Midway. It’s a brand new season, a brand new team with brand new Dodge programs we’re bringing to the NHRA.”

The Winternationals return as the traditional season opener for the NHRA’s 22-race calendar and will (literally) present a new level playing field for racers to kick off a season of tough competition with a freshly prepped track after the historic California dragstrip was ground and polished for its first facelift in 20 years. The action kicks off Friday, February 18, with one qualifying session for pro categories, followed by two more nitro runs on Saturday, February 19, and elimination rounds scheduled to start at 11 a.m. Pacific on Sunday, February 20.

Hagan, a three-time (2011, 2014, 2020) NHRA Funny Car World Champion, closed out the 2021 season as runner-up in the title fight after taking his 11,000-horsepower Dodge Charger SRT Hellcat Redeye to a category-best four national wins to finish the year with a top-10 result for the 11th time in his career.

While he begins the new chapter in his career with his new team and the new Dodge Power Brokers livery, Hagan is confident that he’ll benefit from the consistency provided by once again having his HEMI®-powered machine tuned by longtime crew chief Dickie Venables and fully expects to add to his 39 career victories tally that currently has him fifth on the all-time Funny Car win list.

“I have an amazing crew headed by Dickie Venables, Mike Knudson and Alex Conaway who have been with me for many years and provide the confidence and expectation that even with a new team, we’re going into this weekend and a new season looking to win,” said Hagan, who is second on the win-list at the Pomona dragstrip with six victories (2018, 2017, 2015, 2014, 2013, 2011) and set the current 3.822-second track record run in 2017. “They’re pumped up, focused, excited and more motivated than ever before. We have renewed energy, a new livery and a great race car. We know we’re going to contend from the start and we’re focused on driving the Dodge Power Brokers Funny Car to the winner’s circle.”

Nine-time national event winner Pruett begins her 10th year of Top Fuel competition after a sixth consecutive season with a top-10 finish that included a win at the July edition of the 2021 Winternationals that came on the heels of her runner-up finish at Sonoma Raceway. She’ll work again with Neal Strausbaugh, who takes on crew chief duties for her TSR Dodge Power Brokers Top Fuel dragster along with Mike Domagala and car chief Ryan McGilvery.

The California native has two career wins (2021 and 2017) at her hometown track, which is also the site of her quickest career run of 3.631-seconds in 2018, but she expects her first competition pass with the fledgling Tony Stewart Racing team to be just as memorable.

“After such extensive structuring, planning, and being alongside the team, working through ordering of parts, building of racecars and partner programs, I do truly believe that first burnout to turnout will be one of the most fulfilling passes I will have personally made,” said Pruett. “Stepping on the grounds of Pomona and rolling out our Dodge Power Brokers race cars will initially have the feeling of a win itself, but I am also ready for that moment to go away as soon as it comes, appreciate it, then welcome the feeling of a new era of competition.

“We will be making every performance-enhancing attempt to defend last year’s Winternationals win but we are focused on the fundamentals and coming together as a new team. A win would be nothing short of magical but we’ll strive for creating continuity amongst our people and parts at a faster rate than anyone has seen before.”

Pedregon hopes this year to build on his Cruz Pedregon Racing team’s positive performance after driving his Snap-on Tools Dodge Charger SRT Hellcat to the winner’s circle twice in 2021 and finishing fourth in the final standings. Capps will drive the NAPA Auto Parts Dodge Charger SRT Hellcat into his 28th NHRA season of competition and also make his debut in the dual role of driver and team owner of Ron Capps Motorsports, all while looking to defend his second Funny Car world title.