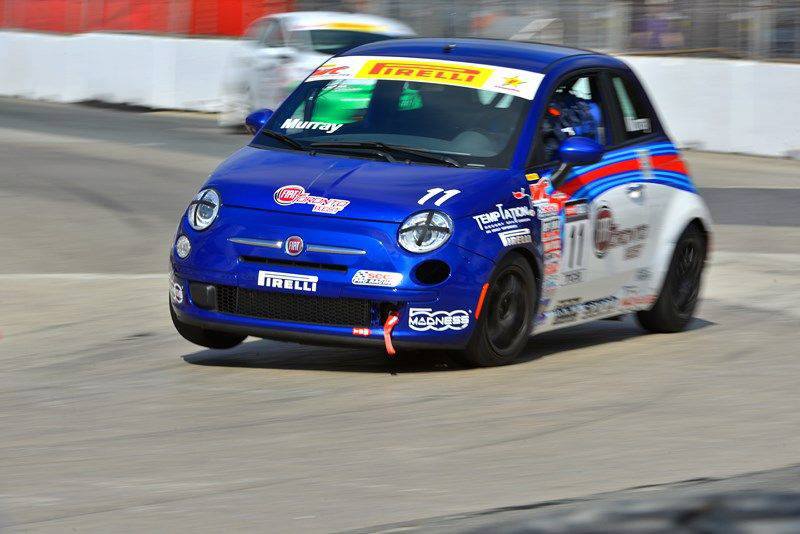 The Fiat 500 attracts attention wherever it goes – including the race track.

A pair of Fiat 500s will challenge the curves and hills of the Mid-Ohio Sports Car Course this weekend, competing in the Touring Car B-Spec class of the SCCA-sanctioned Pirelli World Challenge race series. The World Challenge is a support event for the IndyCar event at the track this weekend.
Of the 32 entries in the class, the cars from the independent Scuderia Team Fiat of Cape Coral, Fla., are the only two Fiat 500s battling in the series.
At the wheel of the Fiat 500s are a pair of rookies in the World Challenge, 18-year-old Jack Murray of Montgomery, Texas, driving car No. 11, and Australian Jim Cleveland, 56, in car No. 78, who got his start racing karts in the 1980s and has returned to racing after a decade break.

The Touring Class B-Spec cars run at least two 25-minute races at each event, and both Murray and Cleveland posted top-10 finishes at the previous event in Toronto in mid-July.

“The Fiat 500 handles great, it’s a blast to drive,” Murray said at the Mid-Ohio track. “We’re able to out-handle every other car in our class.”
With its sharp handling the Fiat 500 is able to run flat-out in most curves, Murray said. That makes twisty tracks such as Mid-Ohio well-suited for the car.
Cleveland said the Fiat 500 is popular in the paddock, too. “It’s the little car that everybody loves. We’ve signed thousands of autographs as our pit is always busy with people who want to see the car.”
At Mid-Ohio, the schedule calls for the Fiat 500s and the other B-Spec class cars, along with the Touring Class cars, to race Saturday, Aug. 2, at 5:20 p.m. and 6 p.m. Eastern. The races will be streamed live on the Internet at www.world-challengetv.com.
After Mid-Ohio, the World Challenge series and the B-spec cars are scheduled to wrap up the season with stops in Sonoma, Calif., on Aug. 23-25 and in Houston on Oct. 4-6. Info about the World Challenge series is at  www.world-challenge.com.
500SCCA