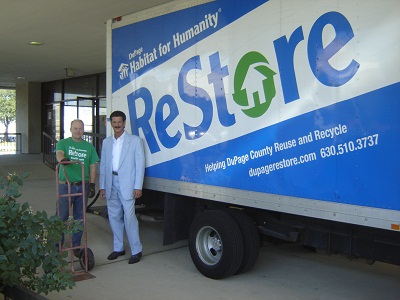 Tony Blake’s new FIAT dealership in Naperville, Ill., isn’t scheduled to open until early next year, but the dealer already is having an impact on this community in Chicago’s western suburbs.
The building that will house the future FIAT dealership at 1540 West Ogden Ave., requires extensive renovations. Before launching into that work, Blake and Chrysler Group LLC invited Habitat for Humanity of DuPage County to come in last week and take whatever furniture they could use.“They were able to take quite a load of office furniture,” said Blake, who is dealer principal at Tyson Motor Corp., a Chrysler-Jeep-Dodge-Ram dealership in nearby Shorewood, Ill. “This building was a former dealership that left a lot of office furniture when it closed. Habitat for Humanity nearly filled their truck with all kinds of desks, file cabinets, and chairs.”The office furniture was taken to the DuPage Habitat for Humanity ReStore, Blake said, adding that he was pleased that the nonprofit organization was able to salvage so much from the building.All items at Habitat for Humanity’s resale store are donated by companies and individuals and sold to the general public at greatly reduced prices. Proceeds from the store go directly to fulfill DuPage Habitat for Humanity’s mission to help build affordable housing for families in need.With renovations now underway, Blake is looking forward to his new FIAT dealership in Naperville, “a great location in a diverse and affluent community,” he said.