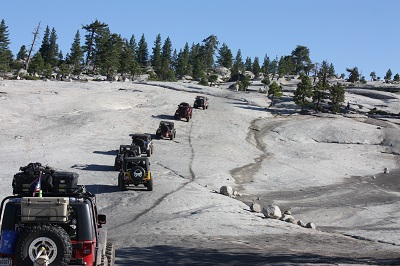 2013 marks the 10th anniversary of the Jeep® Wrangler Rubicon. Built in Toledo, Ohio, it is the most superior off-road vehicle today!

The Jeep Wrangler Rubicon received its name in 2003 from its proving grounds in Northern California, known as the Rubicon Trail, or “Point of no return”. The trail use to be a Native American footpath used for trading, it is now the benchmark for testing Jeeps due to its intense terrain and degree of difficulty.However, it is an epic feat that every Jeep owner must accomplish. One of the best ways to experience the Rubicon Trail is to go with an experienced guide, which is possible with off-roading Jeep “American Legend” Mark A. Smith and his team at Jeep Jamboree USA.

Brittany and I found Mark A. Smith and his wife Irene nestled in the historic mining town of Georgetown, California. They moved to Georgetown in 1951, when Mark purchased his first Jeep for $500. After hearing about The Rubicon Trail, he got together a group of friends and started the first Jeepers Jamboree in 1953. It was a trek down what is now the World’s most popular and intense recreational 4×4 trail. The expedition has turned into an annual event since. Since those days, the popularity of recreational off-roading has elevated to new heights, allowing Jeep Jamboree USA to create organized Jeep trips all across America.As “The Jeep Girls,” the Rubicon Trail was the one trail that we had to conquer. With a short drive from Sacramento to Georgetown, California we knew we were in the right place when we spotted five Jeep Wranglers parked in front of The Georgetown Hotel. Brittany and I looked at each other, and said, “Let the adventures begin!”

After looking for the front desk of the hotel, we found ourselves sitting at a bar in the Saloon to check into our room. After receiving our ancient skeleton key, we fumbled with the lock in the dark for a good ten minutes. We fell on the floor laughing at our inability to get the door opened!We were fortunate enough to share room #5 with Mema, the acclaimed local haunt. We noticed her whimsical enjoyment of rustling the drapes and controlling the speed of the ceiling fan.We met other excited Jeep Jamboree expeditioners, Julian and Fran in the hallway,who expressed their nervousness about trekking though the famous Rubicon Trail.

After a few hours of sleep, we woke up at 4:30AM with the other Jeepers. We headed to the Buffalo Hill shopping center where Glenda Gau of Jeep Jamboree USA greeted us with coffee and delicious hot breakfast sandwiches. We grabbed our bagged lunch, jumped in our separate Jeeps in the Red Group, as all 122 participating Jeeps paraded to Loon Lake, the trailhead of the famed Rubicon Trail. I had the opportunity to ride with Steve Askew in his beautiful 2006 Jeep Wrangler Unlimited Rubicon, who has embarked upon fifteen different Jeep Jamborees. As the trek began, I nervously grabbed the passenger handle as I prayed that we’d make it over the boulders that were larger than myself! After getting through a sticky situation, my driver Steve and I talked about the severity of the trail. He had mentioned, “I know we will get through, because ‘Georgia’ (nicknamed for the origin of his license plate), in the Jeep ahead of us went through the same obstacle.”The experience opened up a whole new perspective; this is why the Jeep community is so strong. It is the ability to get through any obstacle with the support from others, the amazing Jeep Jamboree trail guides, and the idea that we are not alone on this wild adventure.After traveling eight hours through the first seven miles of the trail, we finally made it to camp at Rubicon Springs. It was a feat to jump out in one piece, fenders intact, and us alive! Glenda cheered us into camp as we excitedly looked for the “perfect camp site.” I met up with my sister, as we were amazed we made it through the trail! As we gathered around the fire, Brittany and I learned that is the people that make this adventure so unique! We met Jeep Wrangler fans from all over North America, and even China! The friendships we’ve made on our two-day trek into the Rubicon are friends that we’ll have forever. Until next time…“Have Fun Out There!”Ash and Brit