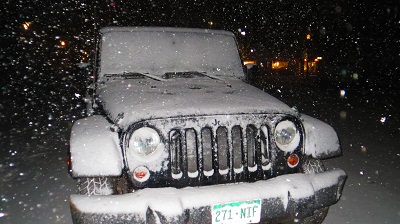 As we March ahead and spring has yet sprung, (save for the fair skies of Phoenix) the Jeep Girls have the combined sentiment that winter has hooked its claws on us. We just can’t escape.

For Ashley and I, the wintriest of the winter months has held us at the foot of the mountains. We have been circling the Rockies once a week for the past four weeks, as if our compass kept directing us back.

Often times, when circumstances have one returning to a place, especially on the road, there is a reason. Possibly there is more to soak up from the land, or from the people we meet, or the mythological reputation of a unique place.

Shortly before, in Aspen, we surrendered all sense of reality as we drove our Jeep Wrangler though the picturesque landscape. In the Wrangler then, Brittany made a casual note that maybe the Yeti would appear when we least expected him. Sure enough, during a lazy afternoon break, Brittany looked to her left, and there stood the fabled half-man, half-beast! With a desire to get closer, we waited until he finished doing whatever Yeti’s do, and planned our approach. Surprisingly, the longhaired creature was more scared of us than we of him! Jokingly Brittany said, “I bet we’ll see him again.”

We left the Rockies satisfied, as another journey brought forth new friends and experiences. (The full recap is available in past posts.) The next week we set our sites on Denver. Driving down the pass to Denver, we had no particular agenda to adhere to, other than to hopefully spot more wildlife and see the best of what’s around.

Just as the snow began to reach the city, we tucked the Wrangler away for the evening and scooted into the Hotel Monaco (right). Another Kimpton property, we were sure to grab our animal robes for another great hosted wine and hors d’ouvres hour.

The next morning, we learned there were two big mountain events happening during our three-night stay in the downtown. The first was the SIA apparel show where we met our new friends of Bench, who specialize in a larger than lifestyle, urban adventure apparel with roots in London. What is so unique about the Bench brand is that it is all encompassing, much like a Jeepers life. The tools they provide, whether as a vehicle or as a body-armor, must carry one into situations 24 hours a day meeting unexpected elements along the journey.

The Jeep Girls and new friends

Our goal as active Jeepers is to be ready for the road while being presentable for the evening rendezvous. Any globe-trekker, airport warrior, or outdoor enthusiast understands the secret smile hidden in this sentiment.

Before leaving, we bumped into the legendary Klaus Obermeyer, and on a whim, we decided to head over to the Kastle skis display. There, seated, was Brittany’s very own Yeti. She had been long-hunting this Yeti. He is also known as X Games decorated skier Colby James West, who moonlights scaring his friends in a Yeti Uni-tard. Colby took some time to show us his neon signature ski collection. He also reminded us to “just have fun out there.” And to always, “do what you love and love what you do!” It’s wonderfully rewarding to meet young men and women who have taken the path less traveled, and love the journey along the winding road.

That evening, we were lucky enough to attend Winter on the Rocks at Red Rocks amphitheater. We made history that night, as this was the only show at the outdoor venue to ever happen in the snow! Icelandic skis and Jeep Cherokee did a great job of embracing the creative, the musical and the fact that nothing can stop the show from going on!

That evening, we enjoyed the Oxford Hotel, Denver’s first hotel. Conde Nast has named it of the “511 Best Places on Earth.” Clearly there is much to say about this!

We learned first-hand that the hotel is abundant in history and ghosts! Listed on the National Register of Historic Places, it boasts a boutique feel. Its 1891 origins have allowed for 80 uniquely decorated guest rooms and one Remington (right)! We won’t tell you where it is; you have to find it for yourself!

Todd told us that once a guest paid his bill or bar tab, as the story goes, with an original western painting of a buffalo which is still displayed in the lobby. He also showed us the room where a mistress was murdered. Again, we won’t mention the room number. We will mention however, that no single male traveler is assigned this room by the reception staff due to ghostly encounters. We did see the room however, and the inscription on the headboard is unique! We pondered finding an unsuspecting soul meandering LODO, or the lower downtown district, but we could find no takers.

Patrick, who has been employed by the hotel for 4 years, offered his insight into the supernatural situation. His “make me a believer” scenario happened one night when a mischievous ghost would not allow him to put all of the accounted for coffee cups away before morning coffee service. Overall, we choose to believe what we want to!

The bones of this grand hotel do still show signs of its original “city within a city” construction. Upon it’s original opening, the Oxford Hotel hosted a barbershop, library, pharmacy, Western Union office, stables and saloon. In 2014, the impressive urban full-service gym offers an award-winning yoga program.

At last we headed towards Boulder. A final must-do is the Celestial Seasonings Tour just down the road.

It was unexpectedly wonderful. Though this location is mostly packaging, it is also the home of the mixing of its teas. Our favorite stop was the mint room, which is kept separate from the other leaves because of its potency. In an airtight vault, the mint overpowers the sinuses and senses. It’s overwhelming and worth the experience. There is no way words can aptly describe the sensation of a mint overload. Luckily at Celestial Seasonings, one can endure the challenge free of charge!

Our final evening was spent in the St. Julien Hotel in Boulder. In lieu of the Boulder Film Festival, it was noted that we were sleeping in Kevin Costner’s favored room. The beds provided a much-needed sanctuary after three days of adventure. Every room in this contemporary hotel was beautiful however. The live music in the lobby provided a lively atmosphere as well.

It’s inevitable that most of us across the U.S. will look back upon this winter with memories of cold weather, delayed travel plans, and just another indicator that the world around us appears to be changing rapidly. But as the road winds before us, we are reminded to tread lightly and carry on!