Heritage,Uncategorized
Remembering a few of our ‘fathers’ for Father’s Day 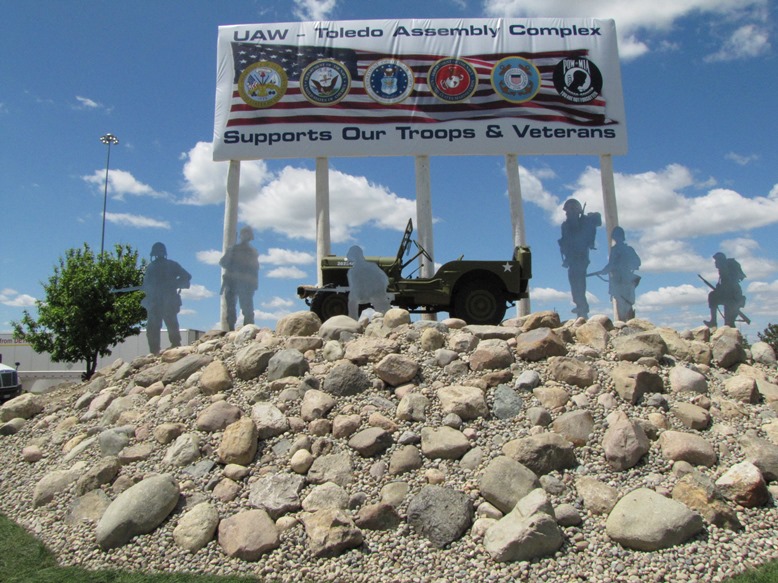 When you think Jeep®, its military service beginnings often come to mind. And the men and women at our Toledo Assembly Complex, home of the Jeep Wrangler, which is the current evolution of the original Willys GP, keep those beginnings close to their heart.“Like all Americans, we owe our freedom to the sacrifices made by the men and women who serve in the military, but at Jeep, we owe our very existence to our WWII veterans,” said TAC Plant Manager Chuck Padden. “When they returned home from the war, they purchased civilian versions of the Jeep vehicles they learned to depend upon in the war. Without them, we would not be here today.”

On Friday, TAC unveiled a tribute to veterans around the U.S., a tribute that TAC employees created themselves, which is pictured above.

The idea for the tribute came from plant management and the local UAW leadership. They agreed that the best way to honor veterans and the plant’s Jeep history was to find a military Jeep to restore and put on permanent display.

With the help of former Toledo plant manager Jerry Huber and a Craig’s List ad, a 1942 Willys was found in Wimberley, Texas, about 28 miles southwest of Austin. The vehicle was in fairly good shape, but didn’t run. When the owner heard that the Jeep plant in Toledo wanted the vehicle to put on display, he immediately pulled the ad, sold it to the plant for $950 and volunteered to transport it to Toledo in exchange for a tour.

One of the 15 TAC employees who worked to restore the 1942 Willys gives it a fresh coat.

The Willys returned home on May 9 and restoration work began on May 12. A team of about 15 Toledo employees worked for a week and a half to return the vehicle to its original condition, replacing parts, refurbishing body panels and painting the vehicle. Because all of the vehicle identification plates and hood graphics were removed, the exact history of the vehicle can’t be determined, but the plant estimates that the vehicle was originally built in mid-1942.

About 10% of the Toledo Assembly Complex’s nearly 4,200 employees have military experience. TAC is home to the Jeep Wrangler, Jeep Wrangler Unlimited and the new Jeep Cherokee.

“The Jeep legacy is not just about the vehicles; it is also about the people,” Padden said. “Some of the people who currently work in this plant and some who helped refurbish this 1942 Jeep are decedents of those who possibly built this very vehicle.”