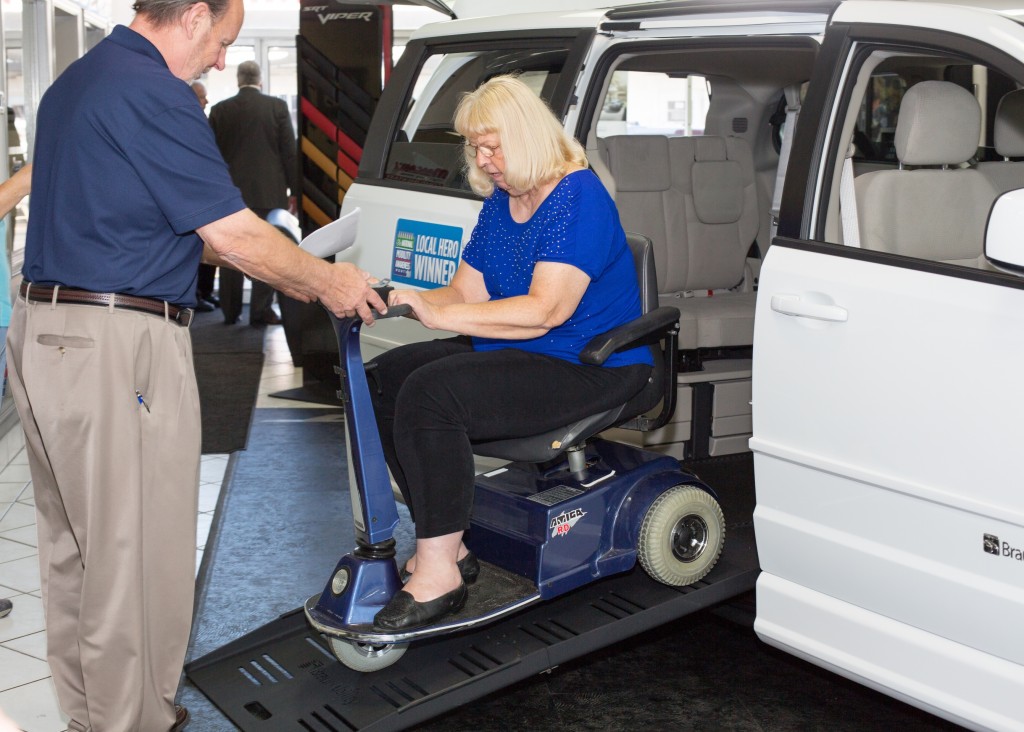 Linda Stearns of suburban Chicago won’t let anything get in the way of her community volunteer efforts.

Multiple Sclerosis hasn’t stopped her. Despite living with MS for the past 30 years, Stearns, 67, of Oak Lawn, Ill., has devoted most of her life to helping others.

Nor has she let a 2009 breast cancer diagnosis hinder her volunteerism. She bakes for emergency homeless shelters, greets World War II veterans at Midway International Airport as they return from a day visiting war memorials in Washington, D.C., and brightens the day of nursing home residents with flowers she obtains and rearranges from funeral homes.

Those are just a few of her ongoing volunteer efforts. Her aging wheelchair-accessible minivan hasn’t slowed her down, but it has forced Stearns to rely more and more on the generosity of others for transportation. Stearns, who has maintained her mobility and freedom with the use of a three-wheel power scooter, can no longer operate the manual lift that allowed her to enter and exit her 2005 minivan. And she no longer has the strength to make that awkward and difficult transfer from scooter to a driver’s seat that does not swivel. 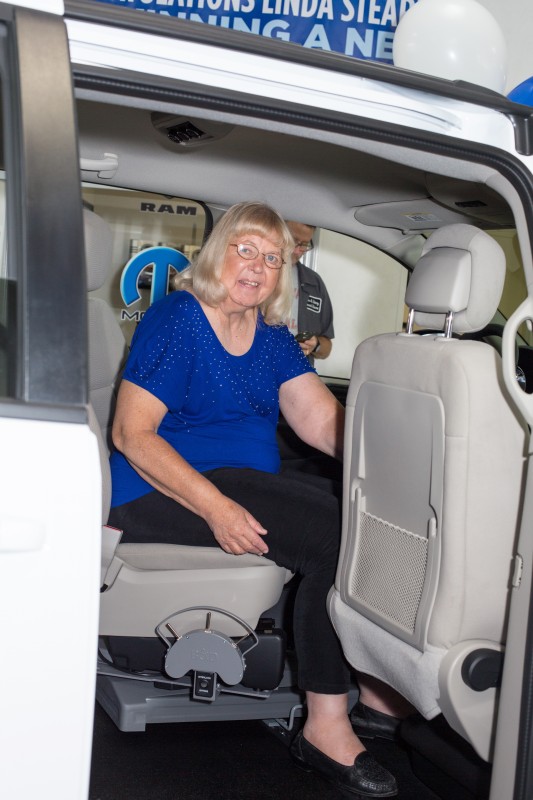 But now, Stearns no longer has to worry about how she will get to the people in need that she so selflessly serves. Stearns is one of four winners in this year’s national “Local Hero” contest presented annually by the National Mobility Equipment Dealers Association (NMEDA). Each winner is receiving a new wheelchair-accessible vehicle tailored to their specific needs.

Chrysler Group, along with NMEDA and BraunAbility, presented a 2014 Dodge Grand Caravan to Stearns Thursday, Sept. 25, at Mancari’s Chrysler Jeep Dodge Ram of Oak Lawn. The Grand Caravan is equipped with a power lift for her scooter and a swiveling driver’s seat to help Stearns transfer easily from the scooter to the driver’s seat.

“This is life changing for me,” Stearns said. “I never have had a new vehicle of any kind in my life. They’ve always been used. When I first heard that I had won, I started crying. I’m so thankful.”

Stearns was nominated as a “Local Hero” by her daughter, Gail Stearns Hussein. In all there were 1,425 entries nationwide. More than 4 million votes were cast online.

“My mother is a person who doesn’t stop living life because of her disease,” Stearns-Hussein wrote in nominating her mother. “She pushes harder, embraces life, for herself and everyone around her. She is not only my hero, but one for many – family, friends and even strangers.”

Stearns points out that she’s not the only one who is going to enjoy this new Grand Caravan. Her “son,” Charlie, also is wheelchair bound. Stearns met Charlie when he was only 9 months old in a residential care facility for persons with mild to profound developmental disabilities. Stearns was only 17. She was volunteering at the facility.

Stearns was told not to get attached because Charlie, who suffered from Spina bifida and hydrocephalus, would not live past the age of 2. But Charlie beat the odds. When he turned 21, Charlie came to live with Stearns permanently. Last November, Charlie turned 49.

Both mother and “son” are going to enjoy their newfound mobility, Stearns said.