Ten years ago today our company jumped into the emerging, lawless, laissez-faire world of social media with the launch of the controversial blog TheFirehouse.biz.

TheFirehouse was the brainchild of then PR chief Jason Vines who wanted a platform to directly address journalists, respond to stories and plant ideas for new stories

TheFirehouse.biz, was named after the Detroit firehouse Chrysler always turned into bar and grill exclusively for reporters and guests during media preview days at the North American International Auto Show each January. The blog was an extension of the firehouse’s purpose of building relationships with the media.

It not only accomplished that goal, but made an immediate impact for two reasons. One, we broke every rule of blogging by only allowing working journalists entry to the site. That won us universal hatred from self-appointed “experts” who said there are no rules in blogging, then tried to hold us to one.

Second, we took on issues no company would touch, especially in a new release. The most impactful was one where we pilloried so-called “Big Oil” for artificially propping up fuel prices. That piece appeared, or was cited, in more than 2,000 publications and websites. Indeed, it was the lead story in the next day’s The Detroit News. 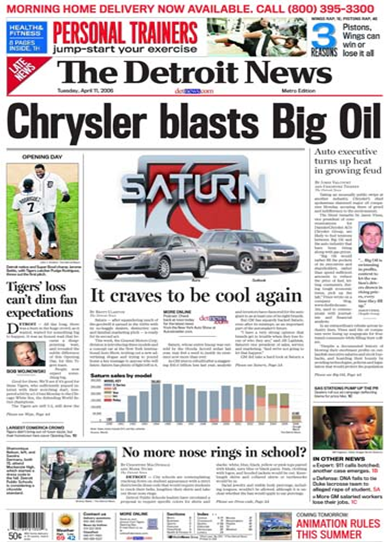 I remember giving a speech at a PR conference in Wiesbaden, Germany, introducing European corporate communicators to TheFirehouse.biz’s unique “voice.” During the Q/A session one gentleman asked, “how do you get away with such repugnant rhetoric?” Then, at lunch he sidled up to me and whispered, “I am so jealous of you. Congratulations!” TheFirehouse.biz went offline in 2010 when the company no longer sponsored the brick and mortar version at the auto show and we moved toward using other social channels to engage with the media and the public.

But TheFirehouse.biz was just the beginning of our pioneering journey into a unified digital newsroom. About 10 months after launching TheFirehouse.biz, we did our first product reveal via live webcast. Since there was no department dedicated to this, it fell in my lap. I had applied for the long-vacant “broadcast communications manager” position and before even being hired, was given those duties. I was promptly told by the person who temporarily held that responsibility that the entire budget for the year was blown … and it was July!

That sparked the next chapter. With no money to hire a production company to create a video news release for an upcoming story, nor funds to finance distribution, we purchased a small mini DVD camera from a big box store and shot it ourselves. YouTube was just emerging and I thought what if we just posted the VNR for free and sent out the link to the media? Well, that worked out pretty well since it cost us nothing to distribute the video and we won coverage as a result. Guess you could say the idea caught on with other companies.

Mike Aberlich, who was second in command, had a brainstorm that would not only change my life, but open the door to everything we accomplished over the next 10 years. He told me that not only would I be hired for that broadcast job, but since I had been a journalist in basically every medium – TV, radio, wires, newspapers, blogging – he’d create a team that would merge all of those disciplines and make me the head of it.

Our new team, Chrysler Electronic Communications, also included the company’s top-rated media website, managed by Courtney Protz-Sanders. Over a period of several months we stepped up our video production activities and instead of simply shooting video or soundbites for the media to use, we created self-contained stories and features that could be posted on websites. We called what we were doing “corporate journalism” long before the term was co-opted by PR agencies and “experts.” A simple video feature explaining how a waterfall we used at auto shows that created the words “Jeep” and various shapes won over a million views on YouTube.

We then created a weekly video recapping Chrysler news called “Under the Pentastar,” named for the company’s trademark. The name was changed in 2014 to “FCA Replay” when Fiat Chrysler Automobiles was created and use of the Pentastar was discontinued. The feature has won awards from Women in Communications, PR News and the International Association of Business Communicators (IABC).

To further show the company’s transparency and dedication to educating consumers, we created the recurring feature, “Insider Outlook,” which was a series of industry experts discussing everything from quality to sales and autonomous vehicles.

To further shore up our dedication to Corporate Journalism we created three new positions called “Multimedia Editors,” who are essentially reporters embedded in the company. They cover beats such as brands, corporate matters, labor, technology, and are responsible for creating social media and video content as unique stories, or to create a multimedia package that augments news releases. Our Multimedia Editors, accompanied most times with a videographer from our team, cover stories the same as a field crew at a station or network. Our content is available for any media to use and is also posted on our Twitter, Facebook and YouTube channels. It is also posted to our groundbreaking site, FCA Content on Demand, which is a constantly changing aggregation of internally and externally produced content that contains company news, features, blog posts, product reviews and videos.

All video we produce is hosted on our in-house video portal found on our media website, making it quick and easy for journalists to find the clips or content they need and immediately download it. Indeed, our media website, under the management of Courtney Protz-Sanders, has become an award-winning, top-rated resource for journalists offering quick access to news releases, images, videos, company information, executive bios, manufacturing fact sheets and electronic product press kits.

Rounding out our multimedia activities is our Livestream webcasting channel, “FCA Live” and regular use of the smartphone webcasting apps Periscope and Meerkat.

Our evolution from a single blog to a self-contained, media website/social media/video production/ corporate news organization was only made possible by a team of creative and courageous individuals who never say “no” to trying new ideas and have the talent and skills to execute them successfully.

Our team is now called FCA Digital Media, but our mission is the same as it’s always been — contribute to the company’s success by creatively and strategically using digital means to communicate the value of its products, technologies, policies and people.

As pioneers of Corporate Journalism we have elevated the art of companies telling their own stories in a literate, engaging manner employing the same journalistic standards as editorial media.

It gives me great pleasure to think about all we’ve accomplished as a team over the past 10 years, but that was then. We’re not nearly done.