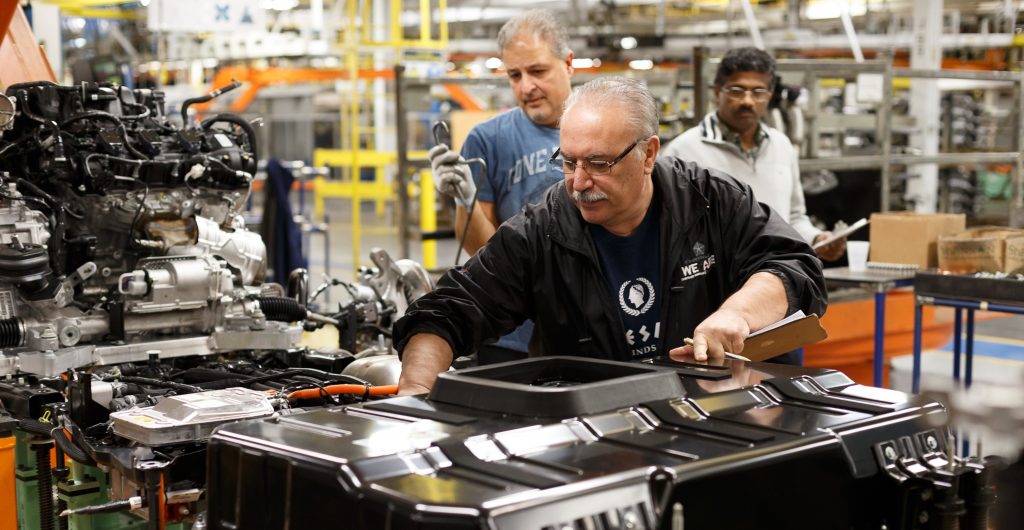 An employee at the Windsor Assembly Plant installs the 16-kWh lithium-ion (Li-ion) battery in the Chrysler Pacifica Hybrid. The Windsor plant launched gas- and hybrid-powered versions of the Pacifica minivan during 2016.

While the men and women at our North American manufacturing operations are around-the-clock busy, building the vehicles you love to drive, there are also other activities that make our manufacturing hum.

During 2016, FCA US announced more than $2.6 billion in investments that would create or retain more than 1,900 jobs. In addition, FCA US celebrated two manufacturing launches of the Chrysler Pacifica minivan in Windsor, marked a milestone at our Detroit plant and saw nine facilities earn World Class Manufacturing awards.

The core of the investments centered around optimizing our manufacturing operations to support our current lineup, while getting ready to shift vehicles to new assembly locations.

January: Warren Stamping (Michigan) celebrated the installation of a high-speed, 180-inch Servo Tandem Press. The new press line increased capacity by up to 12,000 hits per day or approximately 3.6 million parts per year. The $63 million investment was announced in 2014.

April: FCA US is investing $74.7 million in the Trenton Engine Complex (Michigan) to retool the north plant to produce the next-generation four-cylinder engine. The investment keeps 245 jobs. With production slated to begin in the third quarter of 2017, the four-cylinder will provide increased power, while improving fuel economy and reducing CO2 emissions.

Also this month, FCA US announced a $1.48 billion investment in the Sterling Heights Assembly Plant (Michigan). The investment to retool the plant will enable employees to build the next-generation Ram 1500 and support the future growth of the Ram brand.

August: The fruits of an investment, first announced in 2015, were celebrated at the Sterling Stamping Plant (Sterling Heights, Michigan), the world’s largest stamping plant. Installation of two extra-large, 180-inch High Speed Servo Tandem press lines and one large Servo Progressive press line has enabled the plant to increase capacity by 30%.

To say it was a good year at Windsor Assembly Plant (Ontario) would be an understatement. In February, it celebrated the start of production of the newest version of the minivan, the all-new 2017 Chrysler Pacifica. Then, just this month, the industry’s first electrified minivan, the Chrysler Pacifica Hybrid started rolling down the line.

Production of the Pacifica minivan came after FCA US invested $744 million USD, or over $1 billion CAD (based on the exchange rate in December 2015), to upgrade the Windsor plant.

In May, Jefferson North Assembly Plant (Detroit) celebrated the 6,000,000th vehicle made since the plant opened in 1992. The special vehicle was a 2016 75th Anniversary Special Edition Jeep Grand Cherokee. 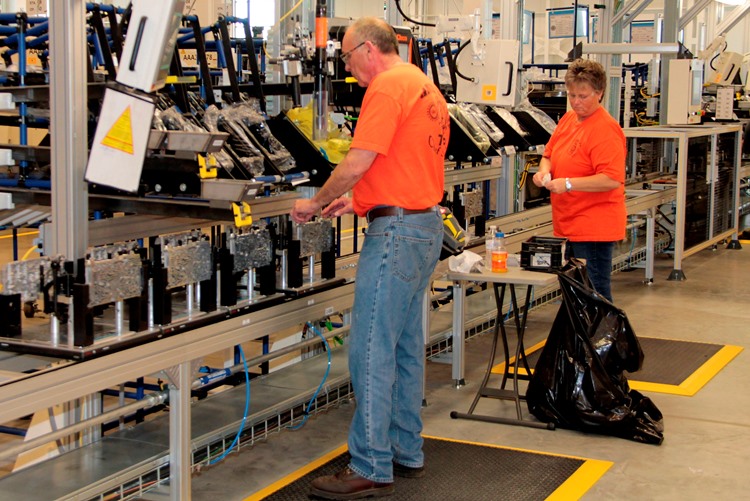 During 2016, the ranks of FCA plants in the U.S., Canada and Mexico with a World Class Manufacturing (WCM) designation grew from 13 to 20, with two achieving silver. .

WCM focuses on eliminating waste, increasing productivity, and improving quality and safety in a systematic and organized way by engaging employees to provide and implement suggestions on how to improve their jobs and their plants. This promotes a strong sense of ownership.

Finally, in showing another “world class” side of FCA US manufacturing employees, we highlighted a few on Giving Tuesday as select examples of the company’s involvement in its communities. Additionally, employees from FCA US manufacturing facilities in Michigan, Illinois, Ohio and Indiana donated $3.03 million to their respective United Way organizations during 2016.