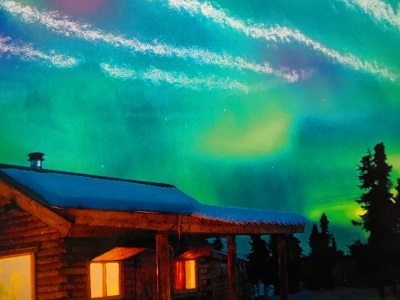 “In search of the northern lights.” This being the response that Ashley and I neatly provided when asked (and we always were), as to why we would choose to take our “Jeep life” journey to Alaska. This is no place for the faint heart. The “land of the midnight sun” is over twice the size of Texas, it contains North America’s tallest mountains, and a place where hunters and the toughest species thrive at -40 degrees Fahrenheit.

Up until this point, the timing never appeared just right to map towards the Alaskan direction. However our perspective has changed. What we have learned by being Jeepers in the past few weeks is that the timing is always right to have an experience, and to travel somewhere new. This time, we were fortunate enough to drive pretty far “off the grid.” It is important to note right away though, that sadly we did not see the elusive Aurora Borealis, our objective. Hailing from the Valley of the Sun, I never thought I would say this but there was just too much sunshine! We did however discover that Alaska, Fairbanks to be exact, is a pretty amazing place!

After a full day of jet travel, were more than happy to pull into The Regency Fairbanks Hotel. This is place is what a Jeeper would want. It is rustic and unpretentious. Animal mounts don the lobby including one named “Fred.” The windows open, and the air outside is brisk. As luck would have it, the hard-working housekeeper is also “Fred.” We adored The Regency Hotel Fairbanks for even more than the aforementioned reasons. For a real experience, Tubby’s Alaskan Barbeque right in the hotel’s basement is usually happening during a hockey game.

Fairbanks, 358 miles north of Anchorage, is a very important gateway to the Dalton Highway. For the “overlander,” Alaska Route 11, or the James W. Dalton Highway, is one of the most coveted overland treks in the world. The road is significant, as it connects work camp Coldfoot to Deadhorse. Both Coldfoot and Deadhorse have a combined permanent population of fewer than 50. The road has the longest stretch of no services. It is desolate and primitive. It is also the lifeline to the Artic Ocean and parallels the Trans-Alaska Pipeline System (TAPS).

If planning an excursion on the Dalton, survival equipment is stressed as much as four wheel drive. For those preparing for the Artic Circle, Denali, or the Dalton, Fairbanks is a lifeline. The food is good and the beer is cold.

The best food, by popular vote however is actually in neighboring North Pole. Authentically the North Pole, the streetlamps are striped like candy canes. The town pitches together during the holidays to make sure every letter addressed to Santa is answered. (Let’s keep that fact a secret from the young and big dreaming Jeepers out there though…)

After proper research, it can be confirmed that although caribou is delicious, it is in fact, neither the most authentic nor the tastiest food of choice in this region. Pagoda, a Chinese restaurant owned by just Ben Lin, is worth journeying to Alaska for however. First of all, for the wee dinner hours, (remember the sun doesn’t set until close to midnight in the spring) the dining area is overflowing. The décor is festive and detailed. The food is the same. The sauces and spices are wonderfully American-Chinese.

Ben has a great story too. He opened Pagoda in his 20s and now is flown far and wide to share his dishes with hundreds. Although he hails from China, his spirit is very Alaskan. He is giving, and passionate and we thank him for sharing his story and his table with us.

The next morning, we visited the Large Animal Research Station, University of Alaska Fairbanks (LARS). This former homestead serves as a research and education environment for high-altitude biology. We got up close with musk oxen, caribou and reindeer. University of Alaska is also home to the Museum of the North. Here you will find our favorite display of wildlife, Otto (right), a nearly 9-foot brown bear who has been greeting guests for nearly 40 years.

Our final must-do is Denali National Park and Preserve. Ashley took the wheel of the Jeep Wrangler as I dozed off for the 121-mile, 2-hour drive from Fairbanks. This is the top of the world. It is just 200 miles south of the Artic Circle. This national park spans six million acres and is divided by a single road. Denali was initially designated as an area to provide refuge for the Dall sheep, the world’s only white mountain sheep. We did not see any sheep, but we did see one lone caribou (below).

In Denali, there are three unique ecosystems: the taiga, tundra, and the alpine. In the taiga much of the ground is permafrost, so in winter months animal life and vegetation is scarce. The soil is at or below freezing for two or more years. A phenomenon occurs with permafrost called a pingo, which is essentially earth-covered ice. With the freezing and thawing seasonally within Denali, the environment is perfect for witnessing these huge mounds of uprooted frozen earth. Most impressively however, is Mt. McKinley, North America’s tallest peak at 20, 320 feet. As we drove the road to mile 13 (the end point for personal vehicles), the views of massive Mt. McKinley changed dramatically. It is impressive.

When asked “why Alaska?” Ashley and I should have responded with “why not!” There is a saying among those in the “lower forty-eight” (as Alaskans refer to us in the contiguous United States), that “Alaska is where the men are men…” They are, because of the desire and necessity to remain self-sufficient. There is also a quiet solitude as to how the people of Alaska conduct their lives, a respect for their environment and community. Much of life is dictated by nature. Needless to say, we did not want to leave the 49th state. Yet what better destination to head to from the great state of Alaska, but state 50?