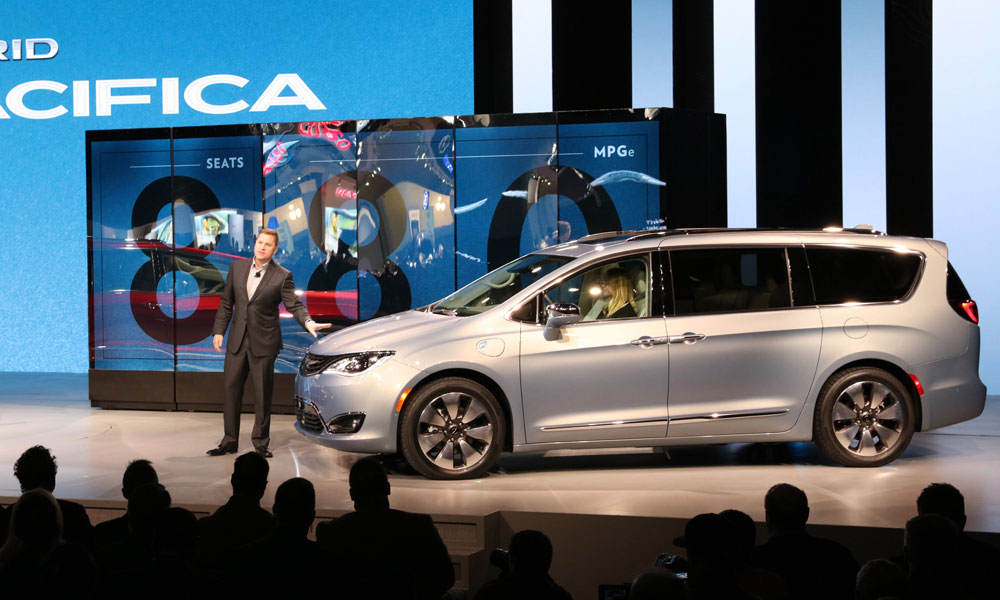 The 2017 Chrysler Pacifica minivan and its plug-in hybrid stablemate both carry an upgraded Pentastar 3.6-liter V-6 under the hood. But the similarities pretty much stop there. Creating the powertrain for the Pacifica Hybrid took more – much more.

But if you add in the output from the two electric motors in the FCA-patented electrically variable transmission, total power at the wheels of the Pacifica Hybrid rises to 260 hp.

As Mike Duhaime, director of electrified propulsion engineering, can tell you from personal experience, driving the Pacifica Hybrid is exhilarating.

How can that be? The key difference is the operation strategy of the two electric motors in the electrically variable transmission.

Hybrid powertrains commonly dedicate one electric motor to provide torque to the wheels and the other motor to act as a generator to charge the battery pack.

But the Pacifica Hybrid’s electrically variable transmission can use both electric motors to deliver torque to the wheels, Duhaime said. This boosts performance as launch from a stop or when the driver needs to accelerate when cruising.

The on-demand torque from the electric motors also let Duhaime and his team tailor the Pentastar V-6 for greater fuel efficiency.

A major change is the adoption of the Atkinson Cycle for the Pentastar. This delays the closing of the intake valve, causing the piston to push a little bit of air back out of the combustion chamber at the start of the compression stroke. This helps with extracting all the energy from the fuel.

Using the Atkinson Cycle reduces the engine’s power output, Duhaime acknowledges. But, “we kept the performance (with the electric motors) and got more efficiency,” he said.

The heart of the Pacifica Hybrid’s performance is the powertrain controller that continually monitors all the elements in the system.

As Duhaime explains: “Every time the driver presses the accelerator pedal, the controller asks where do you want to go in terms of performance and where have you been, then it determines how much torque you need and where is it most efficient to get it.”

We had to ask: Wouldn’t a hybrid with a four-cylinder engine be even better than the Pentastar V-6?

The efficiency of a four-cylinder in the Pacifica Hybrid would be about the same as the Pentastar V-6, Duhaime said. But, the four-cylinder engine would have to work harder, generating much more noise.

“You don’t want to have a Jekyll and Hyde situation where you hit the gas pedal and the engine spins up to high rpm,” Duhaime said. “With the Pentastar V-6 we can bring it on quietly and smoothly. It’s hard to tell when it comes on.”

This is just the start. Duhaime pointed out that his team developed the hybrid powertrain to be easily packaged in a variety of vehicle sizes.