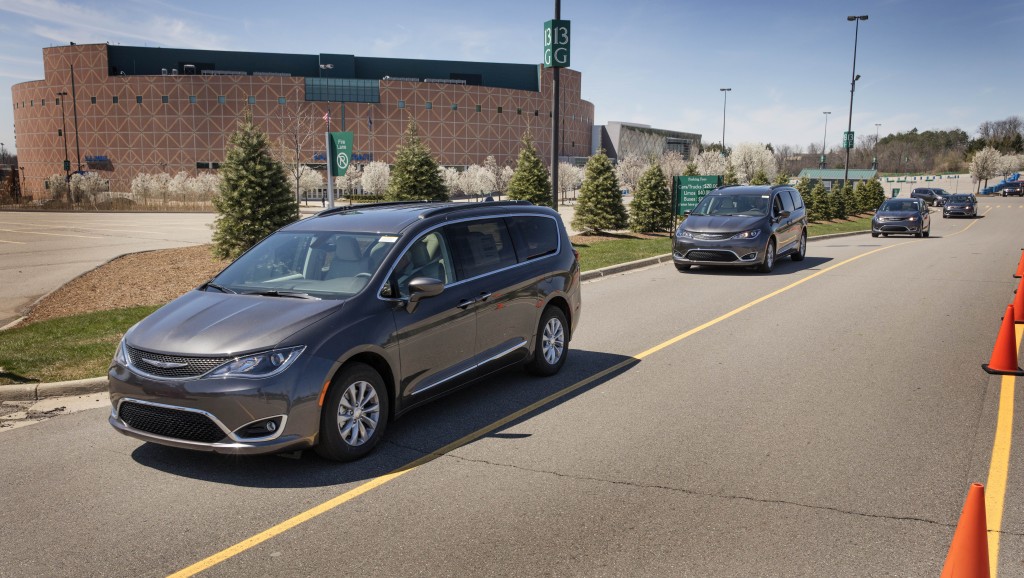 Motorists driving on I-75 near The Palace of Auburn Hills in Michigan likely did a double-take – or even a 200-take – as hundreds of brand new 2017 Chrysler Pacifica minivans took part in a “drive away” program Wednesday, delivering the ultimate family vehicle to dealerships throughout the Great Lakes region.

The parade of minivans to dealerships in Michigan, Ohio, Indiana and Kentucky was the largest ever “drive away” event by FCA US, and provided an opportunity for a number of dealers and their staff to learn more about the highly anticipated new vehicle.

Following the presentation inside the arena, dealers headed out to the parking lot where rows upon rows of new Pacificas awaited their arrival and an eventual cruise back to their dealerships.

Kevin Vanatta, owner of Newberry Motors, is one of those dealers who received his first Pacifica for his dealership in Michigan’s Upper Peninsula.

“I am just so excited to get out there and show it to customers,” said Vanatta, who believes the redesigned minivan will lead customers “to take another look at a minivan.” “I’ve been selling them since 1984, and wow, what a change.”

For the Pacifica, Chrysler went back to the drawing board and redesigned the minivan from the ground up to make it more stylish, lighter and fuel efficient. The new minivan was first revealed at the North American International Auto Show in January and went into production at the Windsor Assembly Plant on Feb. 29.

Jeff Laethem, president of Ray Laethem Chrysler Dodge Jeep Ram, appreciates the refinements made to the vehicle and its “quiet” interior.

“It’s the first thing you notice, it’s just silent inside,” said Laethem. “It feels like a vehicle that is radically more expensive than it actually costs. It is one of the most refined vehicles I have ever driven.”

Dealers are reporting that between the auto show reveal, media reviews of the minivan and new television ads featuring Jim Gaffigan and Seth Meyers, a buzz has been created among customers for the new Pacifica and they are receiving a number of phone calls and online inquiries about the new vehicle.

“We are getting a lot of inquiries on it already. Lots of hits online and people are firing questions left and right,” said Lincoln Phillip, sales manager at Rochester Hills Chrysler Jeep. “We are glad to now be able to answer them and have a car to show them. It’s a tremendous opportunity for us.”

There are about 1,000 Pacifica minivans in stock around the country, and production is increasing to get additional minivans onto dealer lots.

As vehicles arrive on lots, a number of customers are choosing to visit Chrysler’s website to learn more about the minivan. More than 1 million customers have looked at the Pacifica on Chrysler.com.

“We are really excited about the consumer response to the campaign,” said Bruce Velisek, Chrysler brand director. “Once we get them in stock and consumers see them on the lots, we think it will drive even more interest.”